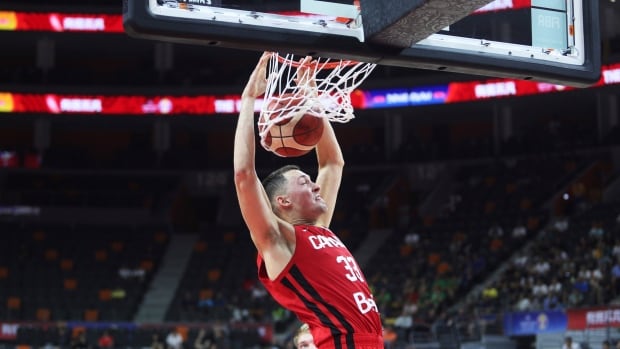 Wiltjer was one of four Canadians to score in double figures.

Making the World Cup is an important first step towards reaching the Paris 2024 Games. A good part of Olympic qualification is directly linked to the results of the World Cup.

Victor Liz scored a game-high 29 points for the Dominican Republic, who managed to keep things tight for most of the game.

Canada came away with the win against the Dominican team at home despite a huge disparity in free throws.

The Dominican Republic took 44 free throws against just 16 for the Canadians. But the Dominicans only made 54.5% of their attempts.

“It’s not easy there,” said Canadian coach Nate Bjorkgren. “We talked about it before the game that we wanted to play through the hits. We might not get all the whistles, but we just have to keep our composure and keep playing and go to the rim. like you’re not going to get the whistle and finish it anyway.

“I think our guys did a great job with that.”

Canada shot the ball well, hitting 52.5% of their attempts from the field.

And although the Dominicans weren’t very good at shooting from the ground, they kept coming, reducing the lead to six on several occasions. It didn’t seem to have much of an impact on the Canadian veterans group.

“I just think we’ve got a good group of guys that have been together,” Kajami-Keane said. “If you look back, we’ve all played together in the national team for the last five or six years. So we kind of understand each other and understand how we can depend on each other.”

Canada’s roster in Santo Domingo didn’t include any of the NBA’s national stars, although it did have a few players who appeared briefly in the NBA, such as Wiltjer and Kyle Alexander.

Canadian guard Kenny Chery was a late scratch in health and safety protocols.

Canada improved to 3-0 in qualifying and remain first in Americas qualifying Group C.

The top three teams from each of the four groups advance to the next phase of qualifying.

The Canadian men’s basketball team hasn’t reached the Olympics since 2000.

Canada will next face the US Virgin Islands on Sunday as the second qualifying window comes to an end before the World Cup in 2023.