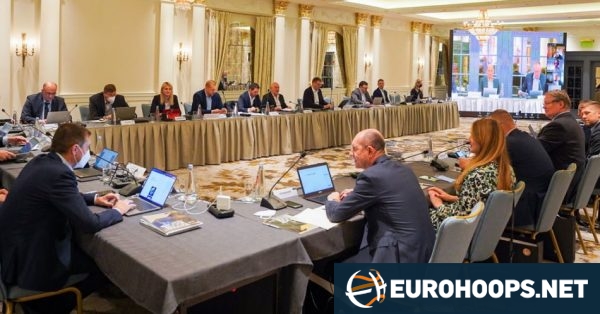 Friday’s FIBA ​​Europe board meeting went through the European Parliament’s vote to protect the European sports model, the EuroBasket 2025 bidding process, the 2022 budget, and more.

According to the press release: “The FIBA ​​Europe Board of Directors, Term 2019-2023, met in Tbilisi, Georgia and via videoconference for its 16th meeting on Friday, December 3, 2021.

It was the first time in history that Georgia hosted such an important event and Mr. Demirel paid tribute to the efforts of the National Federation, in the current difficult circumstances.

The last meeting of the year had a heavy agenda and the following main topics were discussed during the session:

The Board welcomed the recent resolution of the European Parliament on a European sports model aimed at protecting the main characteristics of sport in Europe. The Bureau expressed its satisfaction that the Resolution gives importance to national team competitions, in balance with inter-club competitions, and to the role of values-based organizations such as the International Federations.

The Council also welcomed the fact that the European Parliament resolution draws attention to the negative consequences that closed sports competitions have on organized sport in Europe, such as the fairness and transparency of sports competitions, structures based on volunteerism and the social and educational function, all of which are core values ​​of European Basketball as well as the Board of FIBA ​​Europe is committed to upholding.

The Board of Directors was informed about the ongoing bidding process for FIBA ​​EuroBasket 2025.

The evaluation of the offers of the six bidders (Cyprus, Finland, Hungary, Latvia, Russia, Ukraine) is already underway and will continue until the end of January 2022 before the Board of Directors votes on the hosts at its meeting of March.

The bidding process for the FIBA ​​Women’s EuroBasket 2025 will begin in April 2022 and the hosts will be selected in the spring of 2023.

Reports on qualifiers and upcoming highlights

Board members expressed their gratitude to all the National Federations and clubs that helped to successfully organize all the qualifiers during the November window, especially in the current difficult circumstances.

Approval of small countries, remaining events of 2022 and early designation for 2023

The board also approved all remaining European Junior Championships for next summer and an early designation of hosts for a number of 2023 events.

Budget, Youth Development Fund and its world its rules

The 2022 budget has been approved.

The Youth Development Fund and the “Her World, Her Rules” program for the years 2022-2023 have been approved. Financial support for the two projects has been increased to €4.5 million and €1 million respectively for the coming year.