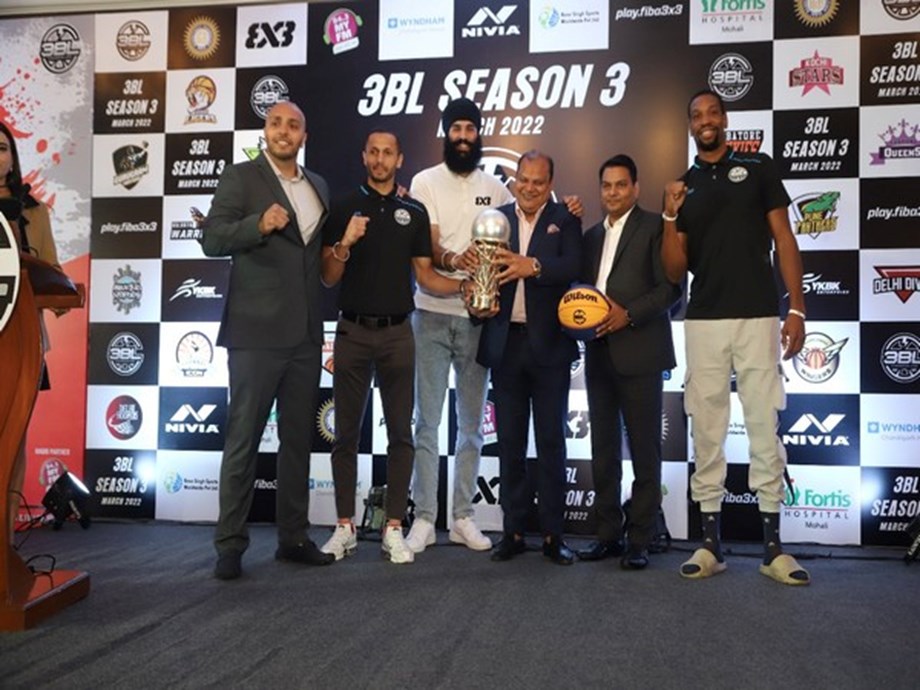 “Before the start of 3BL Season 3, we promised that the Indian Men’s Team FIBA ​​3×3 World Ranking would be around 30th. We are happy to confirm that the Indian Men have now ranked 16th in the world, ahead of Asian powers like China, Iran and the Philippines and even Australia, which competes in the Asian circuit,” said Prerna Sharma. “I want to congratulate Indian men’s basketball players because apart from being among the top 20 in the world, our men’s 3×3 ranking is also the second best in all of Asia, behind only Mongolia,” said Rohit Bakshi.

“We need to maintain the FIBA ​​3×3 Men’s and Women’s World Rankings and improve to be below 4th place in the World Rankings by October 31, 2023 to ensure our men’s and women’s teams qualify for the Olympics. of Paris 2024.” According to the Tokyo 2020 Olympics qualification criteria, only 8 teams per gender compete in the 3×3 event at the Olympics. The top four ranked teams (according to the FIBA ​​3×3 Federation Ranking) gain direct entry, while the next 16 ranked teams play in an Olympic qualifying tournament.

In other words, according to today’s FIBA ​​3×3 Men’s Rankings, the Indian team would be eligible to participate in the Olympic Qualifying Tournament, by virtue of being the 16 ranked teams in the world. In the men’s section, Gurugram Masters crowned the champions, Ahmedabad Wingers were the runners-up and Mumbai Heroes were ranked third.

“The competition is getting tougher and tougher. We will continue to dominate the league and win the 2022 World Tour Finals to be the best team in the world,” said Gurugram Masters co-owner Vikas Bansal. Additionally, the Season 3 3BL champion team, Gurugram Masters, will participate in the prestigious FIBA ​​3×3 “World Tour” event in the Philippines and a FIBA ​​3×3 “Challenger” event in Mongolia. Meanwhile, runners-up Ahmedabad Wingers will compete in the first-ever ASEAN Basketball League (ABL) 3×3 Cup in Bali, Indonesia.

The ABL 3×3 Cup will take place on April 16-17 and the FIBA ​​3×3 World Tour event in the Philippines will take place in Manila on May 28-29. Dates for the “Challenger” event in Mongolia have yet to be decided, but the venue has been confirmed as its capital, Ulaanbaatar. Former India captain Raspreet Sidhu led the Delhi Divas were crowned champions in the second season of the Women’s League which ran alongside the third season of the Men’s League.

“Delhi Divas will join the male runners-up, Ahmedabad Wingers, at the ASEAN Basketball League (ABL) 3×3 Cup in Indonesia. I am proud to be the owner of Delhi Divas and we will support our team to win the title of champion in ABL as we did in season 3 of 3BL,” said Vivek Kumar Singh, owner of Delhi Divas and Delhi Hoopers. “Come 3BL Season 4, we will double the number of women’s teams from six to twelve. This will increase the number of registered Indian players on the FIBA ​​3×3 portal and also push up the Indian women’s ranking, to put it on par . with men,” said Prerna Sharma, director of 3BL. “I thank all the sponsors and partners who have partnered with 3BL Season 3, starting with Wyndham Chandigarh Mohali – for their amazing hospitality, Nivia – for the eye-catching shirts, Boxo Singh Sports Worldwide Pvt Ltd. – our name partner, Fortis Hospital Mohali – for their medical assistance which included surgery for an injured foreign player, Red Bull – our Energy Drink partner to keep our players well hydrated, Sony LIV – our live streaming partner and 94.3 MY FM – our radio partner. Without their support, organizing a league on this scale would simply not have been possible,” said Prerna Sharma. “I would like to express my deepest gratitude to all media present, for your extensive coverage of 3BL – India’s first and only 3×3 basketball league. We hope you will continue to support us in our wider mission to help BFI achieve its goal of seeing Indian basketball teams qualify for the Paris Olympics in 2024,” said Rohit Bakshi.(ANI)

(This story has not been edited by the Devdiscourse team and is auto-generated from a syndicated feed.)