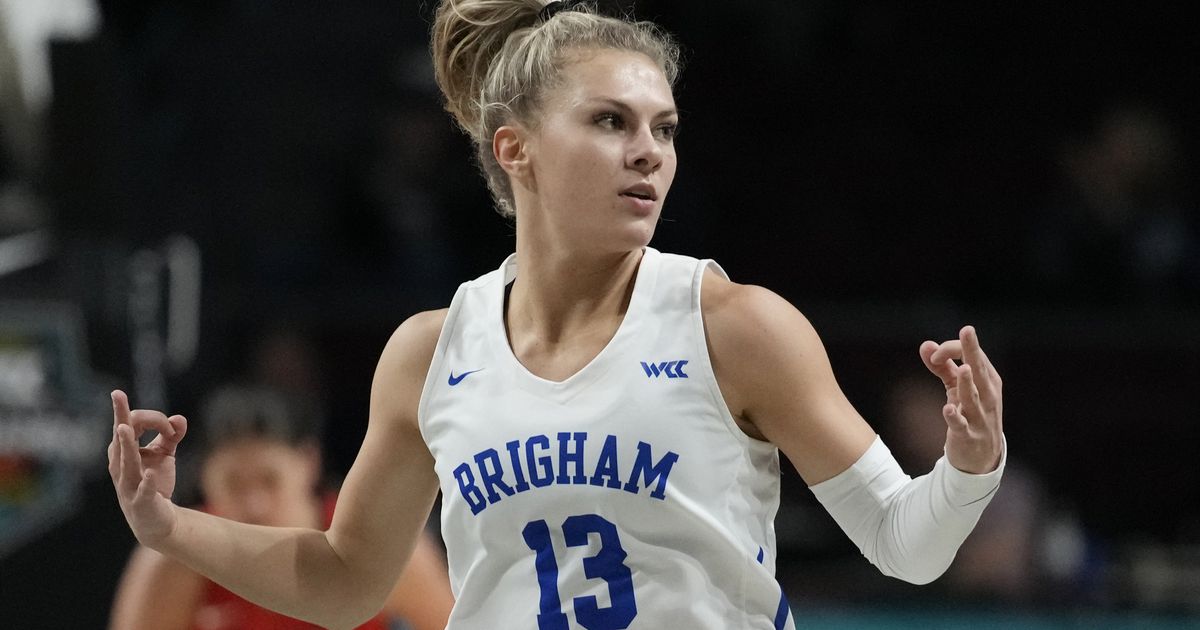 BYU’s Paisley Harding (13) reacts after hitting a 3-point shot against Gonzaga in the first half of an NCAA Women’s College Basketball Championship game at the West Coast Conference Tournament on Tuesday, 8 March 2022 in Las Vegas. (AP Photo/John Locher)

BYU women’s basketball has had many successful seasons throughout its history. But that hasn’t necessarily translated into players moving up from the program to the professional ranks.

There are, however, a few former female Cougars who have turned professional. Jennifer Hamson, Erin Thorn and Ambrosia Anderson all played in the WNBA and overseas after their careers at BYU. Tresa Hamson played two seasons in Europe. And Tina Gunn Robison was drafted by a team from the defunct Women’s Basketball League, but chose not to play.

But the Cougars recently added two more alumni to their roster of pro athletes, and it happened during the same offseason.

“I suppose that is cool because not much happened here [at BYU]Albiero told the Salt Lake Tribune when asked what it meant that she and Harding were going pro almost simultaneously. “So maybe we can start this path.”

BYU guard Maria Albiero (5) drives as Villanova forward Brianna Herlihy (14) defends during the second half of a college basketball game in the first round of the NCAA Tournament, Saturday, March 19, 2022, at Ann Arbor, Mich. (AP Photo/Carlos Osorio)

Harding hails from Washington, so having the opportunity to compete for a roster spot in Seattle is kind of a homecoming for her.

“I almost feel like a hometown hero to the Everett girls,” Harding said in an interview with Storm media. “We can get out of a small, small town and go to the WNBA. It’s really good to have been able to come back to Seattle and even to be invited to a training camp. I feel really lucky to be able to do this.

On top of that, she has the chance to play with women’s basketball legends Sue Bird and Breanna Stewart.

“It’s pretty crazy,” Harding said. “My locker is right between the two of them and it’s a little intimidating to walk into the locker room. But they’ve been nothing but nice and willing to help. But it’s really surreal to be able to kind of be in the same presence than them [and] just try to learn as much as possible from them.

Albiero’s contract is for the rest of the season already underway in the Brazilian league, she said. She added that the team covers her accommodation and meals, so any money she earns is discretionary.

Albiero also expects to get a fair amount of playing time.

“You can definitely count on that,” Albiero said.

Who are the top 16 female basketball players in Montana?