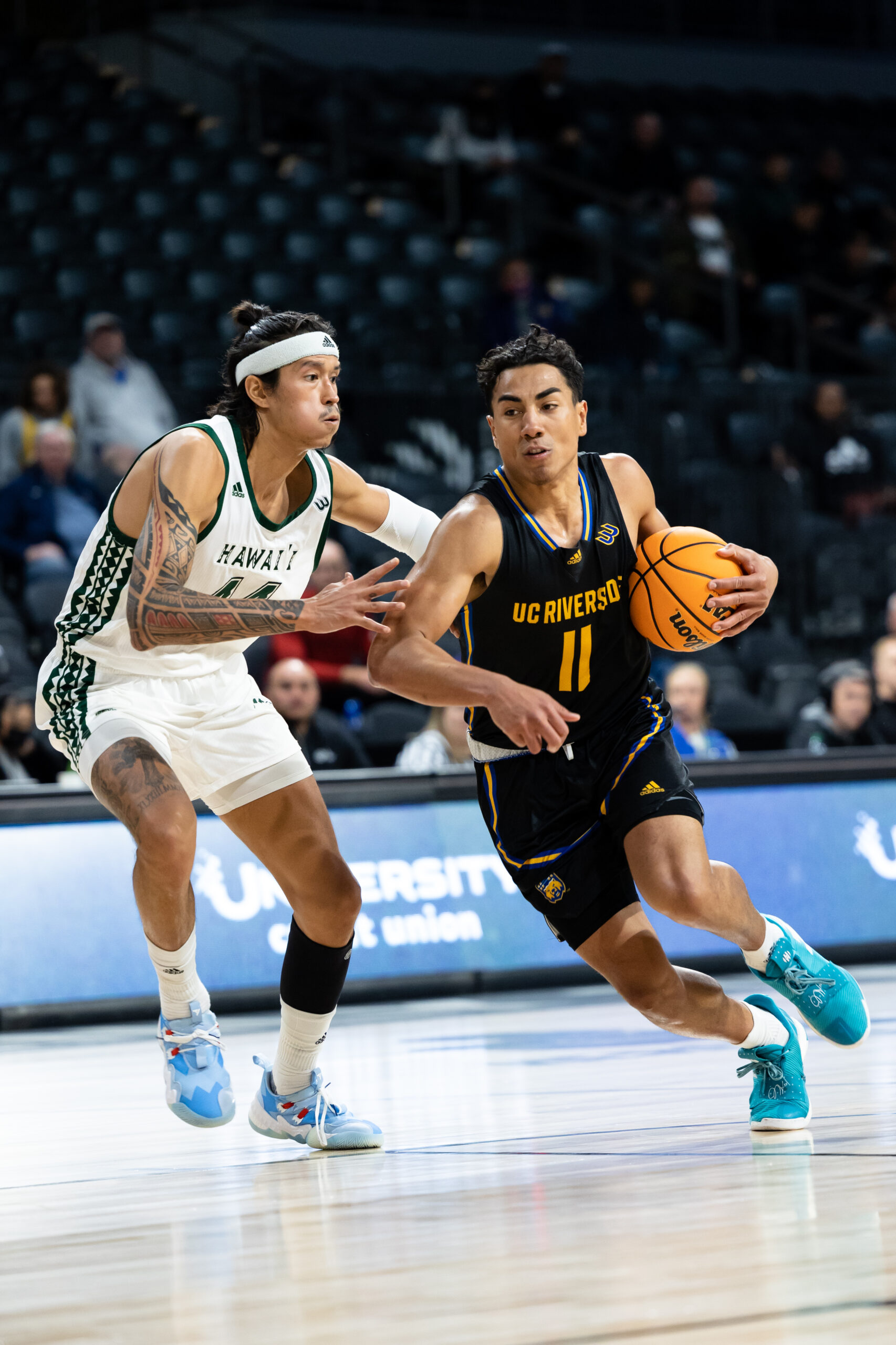 The 2022 Big West Conference Tournament kicked off at the Dollar Loan Center in Henderson, Nevada, March 8-12. The winner of the tournament would get their ticket to the NCAA March Madness Tournament. After a tumultuous season for both men’s and women’s teams due to COVID-19 protocols, canceled games and injuries, the Highlanders finished the regular season strong and were ready for the playoffs.

The men’s basketball team finished the regular season with a 16-12 (9-6) record and ranked sixth in the Big West Conference standings heading into the tournament. The Highlanders were scheduled to face the third-seeded Hawaii Rainbow Warriors on Thursday night March 10. The game got off to a flying start for UC Riverside as grad guard Dominick Pickett sank three 3-pointers to give UCR a 19-9 lead. A layup from redshirt junior center Callum McRae put the Highlanders up 24-15 with 4:07 to go until halftime. However, Hawaii came back strong to close out the first half as a 3-point pullback from guard Junior Madut cut UCR’s lead to 31-30.

The two teams continued to battle each other in the second half as the match was drawn to the wire. With less than two minutes remaining, a lay-up from second Wil Tattersal made it 65-66 in favor of Hawaii. After a missed free throw from Madut, Tattersal had a chance to win the game with a 3-pointer, but the shot was wide left. The Rainbow Warriors eliminated the Highlanders 67-68 in the first round. Junior guard Zyon Pullin led all scorers with 23 points, four rebounds and five assists. Redshirt junior guard Flynn Cameron also had 17 points, including five 3-pointers. “I’m very, very proud of these guys. Three consecutive winning seasons, really something to be proud of,” head coach Mike Magpayo said after the game.

The women’s basketball team finished the regular season with a 14-11 (10-6) record and ranked fourth in the Big West Conference standings. The Highlanders faced fifth seed UC Santa Barbara in the first round. UC Riverside fell behind early in the first half, trailing by up to 8 points. However, a late 7-0 run in the second quarter by UCR made the game 29-28 at halftime. In the second half, the Highlanders fell behind again, but once again fought back and got back into the ball game. In the fourth quarter, the game went back and forth as neither team seemed able to gain control of the lead. With less than two minutes left in the game, it remained 41-40 in favor of UCR, and with 25 seconds left, junior guard Jada Holland connected on a lay-up to give the Highlanders a lead. of 43-40, in which UC Riverside would hold to win 46-42 and advance to the second round. Holland led the team with 12 points, while junior forward Anna Blount had 10 points and six rebounds.

In the semi-finals, UCR faced the top-seeded Hawaii Rainbow Wahines, led by player of the year Amy Atwell. Early in the game, the Highlanders fell behind as Hawaii seemed to be ahead of them. In the second quarter, the Rainbow Wahines dumped it from downtown as they went 7-7 from 3-point range in the quarter. Atwell led the charge for Hawaii as they connected on five 3-pointers in the quarter, extending the lead to 26 points in the first half. The Highlanders came out aggressive in the third quarter as they managed to cut the deficit to 11. However, Hawaii proved why they were the conference seed as they hit buckets in time to give them the 69-55 win. on CPU. Riverside. Holland led the team with 15 points, four rebounds and five assists. Redshirt senior Olivia West also contributed with 12 points in the game. “I didn’t think we played like us in the first half…but a great second half, great fight, really proud of our team the way we finished the game,” the coach said. -chef Nicole Powell after the game.

The University of Hawaii won the women’s group, taking on UC Irvine in an incredible 59-48 win. The University of Hawaii trailed early in the game, but Rainbow Wahine’s continued effort led to an eventual win. Cal State Fullerton won the men’s pool by defeating Long Beach State in a thrilling 72-71 win. The Titans’ hot 3-point shot led their comeback against the Elbees.

The Highlanders will now look to bring in transfer athletes from different programs, develop young talent, continue to build on their winning seasons and win the Big West Conference championship next season.