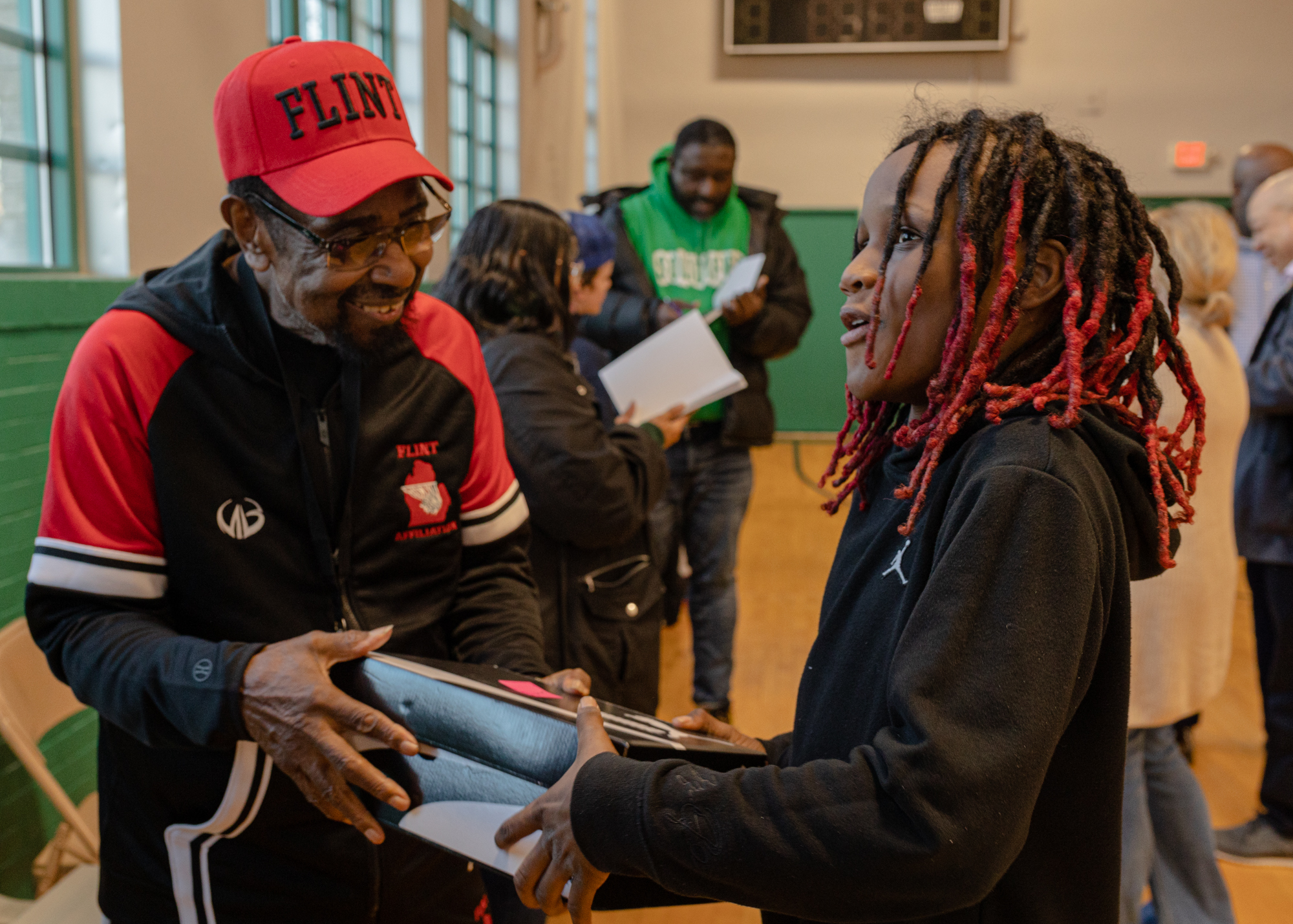 Never miss a beat! Sign up for the Flint Beat newsletter.

Flint, MI – Ten-year-old basketball player Jacob Turner’s face lit up when coach David Munerlyn, 82, presented him with a box with a brand new pair of Puma sneakers and a copy of ‘All In: The Kelvin Torbert Story” at the Haskell Community Center in Flint.

On Tuesday, as the setting sun filtered through the gymnasium windows, the coaches shouted “balls up!” after practice and called their sweaty 4th and 5th graders to the center of the field.

Flint native Kelvin Torbert, a former one of Michigan’s top basketball players, and ESPN reporter Eric Woodyard, who wrote the book with Torbert, took to center court to offer words of encouragement to players.

“Coach Mun told me that I could be anything. When there were teachers and people in the neighborhood who told me that I would be nothing, he believed in me. My parents believed in me. Other coaches They believed in me. And guess what, I took what they said. Growing up in Flint, they don’t think you’ll make it. It’s just brutal honesty. As small as this town is, there’s a lot of people who did, like Kyle Kuzma, he gave you shoes,” Torbert said with the circle of young eyes on him.

Torbert and Woodyard have been working together on “All In,” a biography of Torbert’s life, since 2014. In the first two pages of the book, Woodyard explains why it matters. It reads:

“So when you ask me what the overall purpose of the book is to reintroduce one of the greatest high school basketball players of all time to a younger generation and also to dispel some misconceptions for the people who watched him live.

“The goal is also to tell his story in the right way and give young athletes a glimpse of what life can be like if you have all that hype going into college and things don’t pan out. not as you expected. What is life like then? And will you be ready?

Torbert explained, “The book isn’t just about basketball, it’s about life, mental health, and struggling to get out of deep rabbit holes and things of that nature.” and added: “It’s our credit to Coach Mun, who still does it, has done it for 30 years, walks around with these kids, it says a lot about him and the community, the parents trust him. ”

Woodyard and Torbert wanted to use the proceeds from the book to do something positive for the community. They teamed up with Flint-born Washington Wizards NBA player Kyle Kuzma to get a discount on new Puma sneakers for each of the 4th and 5th graders.

The young basketball players stood quietly in expectation, waiting for coach David Munerlyn to read their names one by one from the shoeboxes. They opened the boxes to reveal their new kicks and a clean copy of All in, then walked excitedly to Torbert and Woodyard for autographs.

“We need more people like us, to control our narrative in Flint. We hear all these urban stories about how that person was great or that but like, we don’t really have a platform to control our own narrative so I think now we have that platform and we have the children and the people to do it. I’m so happy to be from Flint and to be in the position that I’m in to give back. It’s just the love, the energy here today, these kids will remember forever,” Woodyard said.