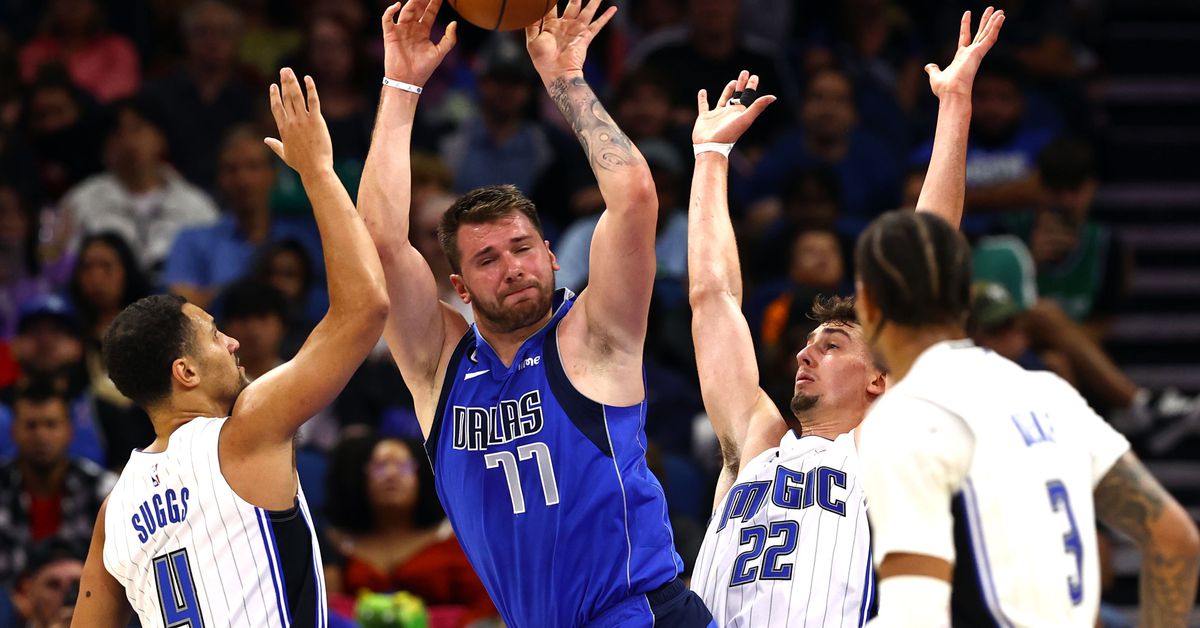 Around the NBA: Luka-ball, the Bucks’ new defense and trouble at Minny

Welcome to Around the NBA! This is a new weekly column that will discuss recent stories around the league. Instead of focusing on specific teams, we’ll instead talk about the most important trends and their impact on the league.

For starters, let’s dive into Luka’s ungodly start to the season and see how far his heliocentric style can take Dallas.

After scoring 30 or more points in nine straight games to start the year, Luka finally had a game “down” by contributing 24 in a loss to the Magic on Wednesday night. So far, the prodigy has averaged 33.6 points, 8.3 rebounds and 7.9 assists.

Oh, and he does it shooting 29% from three, which is 5% below his career norm.

Surprisingly, Luka’s current usage isn’t that far off his career average. In fact, this is the fourth consecutive year that it has exceeded 40%. What’s crazy is that he only returns the ball 3.4 times per game, almost one less than his career average. Luka’s true shooting percentage is also at an all time high (59.1%) – while struggling from beyond the arc.

There’s no doubt that Luka has played the basketball of his life, and it’s an absolute joy to watch him dissect defenses on the fly.

Luka Doncic faced at least 11 (!) different covers against the Toronto Raptors on Friday night. It didn’t matter – Luka dissected them all.

Look how he did it: pic.twitter.com/W8EkmpBveK

However, there are still things to worry about when it comes to Dallas’ style of play. For starters, they’re dead last in the frequency of games going into transition and have been in the bottom three since 2015-16. The Mavs are also 27th in transition points per game, so they’re also not taking advantage of the defense on his heels.

With Luka’s methodical style, the Mavs will never be a team that runs a ton, but always having to face fixed defenses will take its toll, especially in the playoffs when opposing teams can focus more on stratagems – this happened last year against the Warriors.

That said, the most concerning trend is Luka’s declining play from the first to the second half. Much has been said about his conditioning in the past, and even though he entered this season in better shape after playing in FIBA, no one will consider Luka the best at taking care of his body. Add that to his ridiculous workload and it’s easy to see why he suffers a drop in play as the game progresses.

Although he’s still amazing, there’s no doubt that Luka wears himself out in the second half of games. Teams will continue to attack him defensively in the playoffs to compound this problem, which is why the Mavs cannot be considered true title contenders until they find a true second star who can take on the challenge. part of the offensive burden.

Since Mike Budenholzer became Milwaukee’s coach in 2018-19, the Bucks have used a defensive system that prioritizes rim protection over shutting down three-point shooters. In each of the past four seasons, they’ve ranked in the bottom five in the league for percentage of shots conceded to opponents from long range, but in the top five for frequency of shots allowed at the rim.

That compromise has paid off as Milwaukee has sported a top-10 defense every season except the most recent, which was largely caused by the absence of Brook Lopez. However, the team saw the downside of their strategy in the playoffs last year when the Celtics knocked them out in Game 7 by hitting a three-game shoot-off.

In the clip above, Lopez is focused solely on preventing the lob to Horford and slumps in the paint, leaving Grant Williams open from three. Things are different this year, however, as Milwaukee decided to switch things up by prioritizing closures for shooters.

Right now, the Bucks are in the top 10 in both shots conceded on three and edge percentage, with the Celtics being the only other team to boast the same. Milwaukee’s league-best defense also gives up 3.5 fewer points per 100 possessions than second-ranked Phoenix, a bigger difference than the Suns and ninth-ranked Dallas.

The schematic difference can be noticed in the following clip. In years past, Bobby Portis and Jordan Nwora would have collapsed in the paint to contain Tre Mann’s drive, but Milwaukee’s new strategy calls for them to close in on the opposing team’s shooters.

The scariest thing about Milwaukee’s defense is that their game doesn’t seem unsustainable. Sure, the opponents’ effective field goal percentage is lower than expected (52.8% expected vs. 49.5% actual), but even that number of 52.8% is top three in the league. .

Lopez has also had a torrid start to the year and is currently stopping 2.7 shots per game. While no one expects that to continue with him at 34, the Bucks are also missing another strong defenseman in Khris Middleton.

So what does all this mean? Well, Milwaukee look set to finish first in defense and currently have the best record in the league even without one of their All-Stars, so they should definitely be considered title favorites going forward.

What’s going on in Minnesota??

Heading into this season, it was easy to predict Wolves could start slowly as they work to integrate Rudy Gobert into their system.

I don’t think many people expected the vibes around the team to be that bad, though.

Whether it’s KAT randomly calling Ant about his diet or Ant saying he’d rather play with smaller lineups, nothing seems to be going well with Minny these days.

Just look at the following possession:

If that wasn’t enough, D’Angelo Russell decided to outdo his teammate by producing an all-time Shaqtin moment:

The elephant (or KAT? Or Ant?) in the room, of course, is Gobert’s acquisition. So far, he’s done exactly what everyone expects him to do, which is provide defense: Minnesota has a defensive rating of 107.2 with him on the court (which would be second in the league) and a rating of 116.6 without him (28th).

Unsurprisingly, the concern is at the other end of the field. Wolves have an anemic 103.1 offensive rating with Gobert playing (last dead league-wide), but the most worrying trend is that the offense is just as bad when he and KAT share the floor. Here are their full stats:

These latter numbers are obviously not sustainable and are the result of playing against opposing bench units, but nonetheless, it’s not a good sign when the most successful lineups don’t include any of the big men on the pitch.

Gobert’s presence in the paint has understandably forced KAT to stretch, as the latter’s attempted rim shot percentage has dropped from 44% last year to 25% now. This is to be expected and not a bad thing considering KAT’s shooting skill, but it also had a negative effect on Gobert’s already suspect offensive play.

So far, the French center is only shooting 65% around the edge, putting him in the 33rd percentile of his position, which is a big shoutout compared to the 77% and 90th percentiles he put in place last year.

To make matters worse, Ant has been forced to adjust his game, which is evident given he has just three dunks in 12 games this season after making 58 in 72 games last year.

Even so, Wolves are hugely talented and I’m still optimistic about their chances of making the playoffs, but there’s a reason so many people were confused that they (1) pushed their chips so early. , and (2) used their assets on a big man whose timeline doesn’t match Ant’s.

Regardless, Minnesota never fails to entertain, even if not always in a positive way.

This week, please check out CoachSpins’ article on Devin Vassell and Keldon Johnson! A great mix of analysis and film studies are included, which helps readers understand how the two youngsters make the leap.

Thanks for reading and until next time!

All stats courtesy of Statmuse, Cleaning the Glass and NBA Stats.