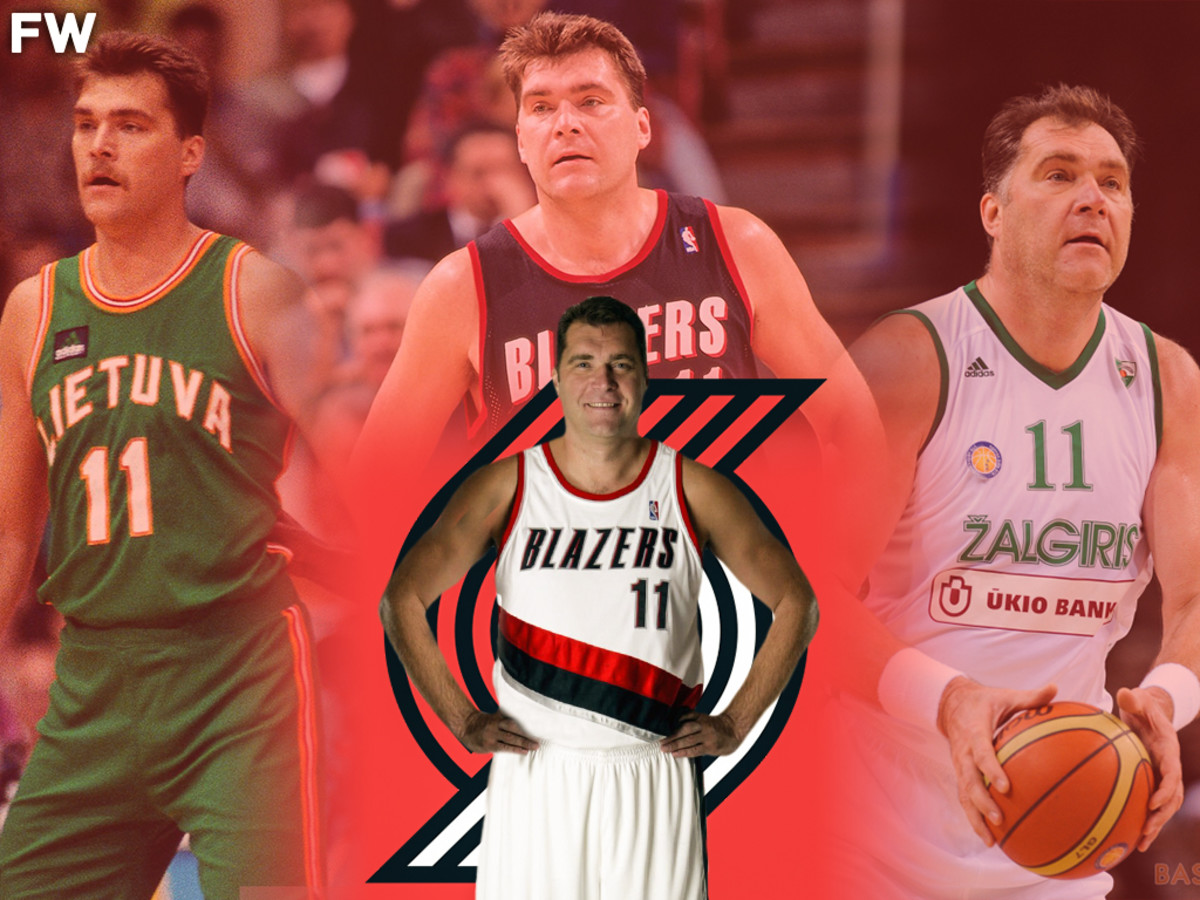 Arvydas Sabonis: the life of one of the greatest international basketball players of all time

NBA fans of the early 2000s remember Arvydas Sabonis, the center of those hard-nosed Portland Trail Blazers. Sabonis is generally known for being the old, slow player who was a brilliant passer from the post.

Fans might also remember that Sabonis was able to get out there and hit the 15-footer. Sabonis is remembered for having a short NBA career that failed to win through Shaquille O’Neal, Kobe Bryant and the Los Angeles Lakers.

Fans probably remember all this about Arvydas Sabonis, but do they know that Sabonis was a superstar player overseas? In this article, we will delve deeper into the quality of a Sabonis player in Europe.

Arvydas Sabonis was born in Kaunas, then known as the Lithuanian Soviet Socialist Republic. At the age of 13, Sabonis started playing basketball and he quickly fell in love with the game.

In just two short years, Sabonis would be selected to the USSR national junior team. Here, the international world would get its first glimpse of a future superstar.

In 1982, Sabonis played for the Soviet Union national team, and they traveled to the United States, playing against a few college teams. Now America has seen the talent that Sabonis possessed.

American colleges would keep their eyes on Sabonis as he joined his hometown team, Basketball Club Žalgiris. This club is one of the oldest basketball teams in the Euroleague.

Sabonis’ time with Žalgiris would make him a legend in Lithuania. Before Sabonis joined Basketball Club Žalgiris, the team known as CSKA Moscow was the dominant team in the Soviet League.

Sabonis would not mind CSKA Moscow’s dominance, as he led Žalgiris to three consecutive Soviet League titles from 1985 to 1987. The entire world of international basketball witnessed a new dominating force in Arvydas Sabonis.

This dominance led NBA teams to act as Sabonis would be drafted twice into the NBA.

Sabonis was originally drafted in the 1985 NBA draft as the 77th fourth-round pick by the Atlanta Hawks. Although he was selected by the Hawks, Sabonis would not play as the pick would be ruled illegal since Sabonis was under 21.

The following year, in the 1986 NBA Draft, Sabonis would again be selected, this time in the first round with the Portland Trail Blazers’ 24th pick.

This choice would come as a shock to some, as Sabonis tore his Achilles tendon in the spring of 1986. Sabonis’ ACL injury was not a complete shock, as he appeared to be overused by the Soviet national team.

The Soviet national team and Basketball Club Žalgiris had Sabonis playing basketball nonstop with few breaks in between. This exhausted Sabonis’ body.

Sabonis will undergo surgery to repair his 1988 Achilles tendon injury in Portland by Tail Blazers medical staff. Their hope would be that after recovering from surgery, Sabonis would finally make his NBA debut.

This would not happen, as only four months later the Soviet national team deemed Sabonis cured and hurriedly sent him back to play in the 1988 Olympics. For Sabonis, this would be devastating to his career.

Sabonis’ career would suffer from his hasty return to action, but for the 1988 Olympics things would be glorious. The Soviet Union national team upset the United States Olympic team 82-76 in the semifinals.

It’s the first time the United States men’s basketball team hasn’t won the gold medal since the 1972 Olympics, where they lost to the Soviet Union in the gold medal game. gold.

This time around, the Soviet Union would win the gold medal beating Yugoslavia, 76-63, in the gold medal game. Sabonis averaged 13.3 points, 11.1 rebounds and 1.7 blocks per game during the 1988 Olympics.

Sabonis also participated in the 1992 and 1996 Olympics, this time as a member of the Lithuanian team, since the fall of the Soviet Union on December 25, 1991. Lithuania won the bronze medal at the 1992 Olympics and 1996.

Sabonis has won over everyone who has seen him play, including some big names in basketball:

“A 7’3″ Larry Bird because of his shooting range, passing ability, vision of the field and mentality to dominate games,” said Hall of Famer Bill Walton , about Sabonis.

“He had the size, the skills, the strength and everything to be able to play. The evolution you see now would have started a little earlier. He was really special, and the league didn’t see him at or near his peak,” Boston Celtic great Kevin McHale said of Sabonis on NBA Gametime.

“Just as athletic as David Robinson. I remember him catching a few dunks off the back of David Robinson in competition. This guy was amazing for the Soviet Union. If Sabonis would have been here at his peak, he would accelerate the evolution of the current situation of the three-point game, especially in terms of starting the big ones and being able to shoot there, ”explained Brian Shaw of Sabonis on NBA Playing Time.”

After the 1994-95 season with Real Madrid, Sabonis’ incredible international basketball career looked like this:

– 6x Euroscar Player of the Year

– 2x European player of the year

– 4x Lithuanian Sportsman of the Year

By the time of the 1995-96 season, Sabonis was finally ready to take his talents to the NBA.

Welcome to the NBA, Mr. Sabonis

It was in the summer of 1995 when Sabonis contacted the NBA team that drafted him in 1986, the Portland Trail Blazers, and told them he was open to joining the team. Before he had a chance to play, the Trail Blazers would give Sabonis a physical, which is routine.

The Trail Blazers organization was aware of Sabonis’ history of injuries and overexertion, so they subjected Sabonis to extensive medical testing. After the tests, a Trail Blazers team doctor said:

“Arvydas could qualify for disabled parking based on his x-rays alone.”

Even with this horrible news, the Portland Trail Blazers decided to roll the dice by signing Sabonis to a deal, and NBA fans would finally have the chance to see Sabonis play in basketball’s biggest league.

As a rookie, Sabonis showed off his skills which won over NBA fans. He had some incredible games, especially in the playoffs against the Utah Jazz.

Sabonis finished his rookie season averaging 14.5 points, 8.1 rebounds, and 1.1 blocks per game. It was good enough to earn Sabonis a spot on the 1995-96 All-Rookie Team.

Sabonis would play six seasons for the Trail Blazers, retiring after the 2000-01 season. The Trail Blazers wanted to re-sign Sabonis, but he declined, citing he was “mentally and physically tired.”

Sabonis would only remain retired for one season before returning to the Trail Blazers in the 2002-03 season. The Trail Blazers would make the playoffs as the sixth seed with a 50-32 record.

Sabonis would average 10.0 points and 4.0 rebounds in just 14.5 minutes per game in his final NBA playoff series. The Trail Blazers would fall to the Dallas Mavericks, 4-3.

Returning to Žalgiris to end his Hall of Fame career

After retiring from the NBA after the 2002–03 season, Sabonis returned to the team where his career began, Basketball Club Žalgiris. Sabonis will end his career on a high note.

Žalgiris would make the EuroLeague Top 16 with Sabonis back on the list. He was also named regular season MVP and Top 16 MVP.

Sabonis would also be named the team president of Basketball Club Žalgiris, as his fans really adored him. 2005 would be the year Sabonis would officially retire from basketball as a player.

Sabonis is now a co-owner of Basketball Club Žalgiris and runs a youth basketball clinic in Kaunas, Lithuania. It’s great to see that Sabonis is still involved in basketball and, as you may know, his son, Domantas Sabonis, is an NBA player with the Sacramento Kings.

Unfortunately, NBA fans didn’t get to see Arvydas Sabonis in his prime before all of his injuries. But for international fans, they got to see one of the greatest basketball players of all time perform on the highest stage.

Top destinations for 10 NBA stars this summer: Donovan Mitchell to stay with Utah Jazz, Russell Westbrook could be traded

Most All-NBA first-team selection by franchise: Lakers are first, no one even close