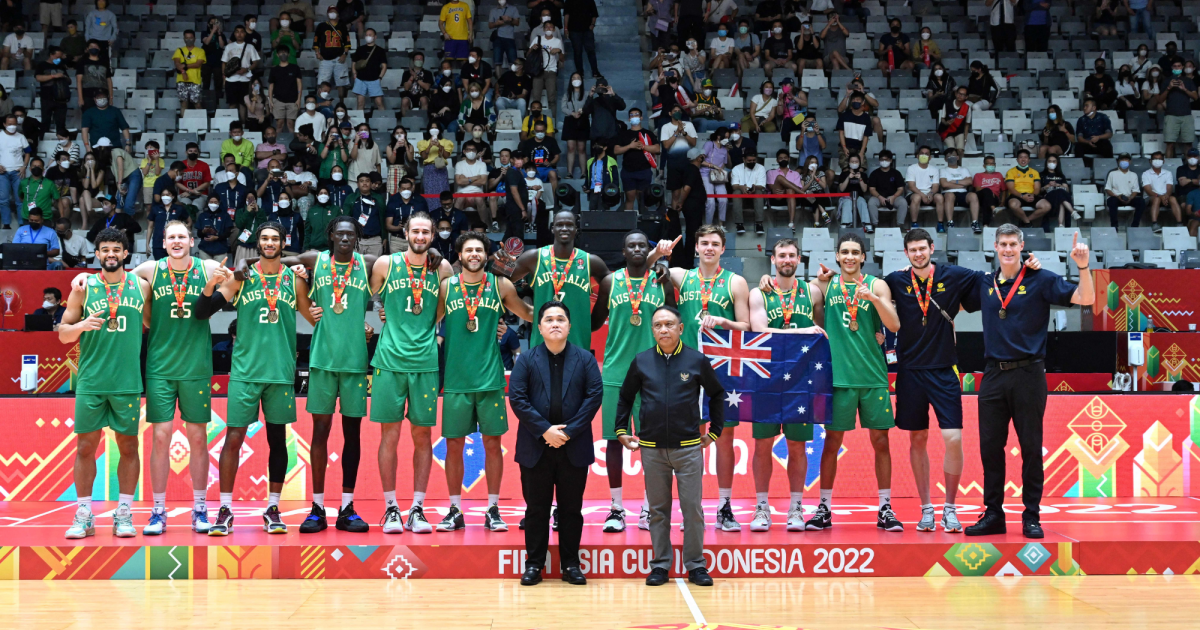 Australia’s road to the FIBA ​​World Championship: Which Asian Cup Boomers could make the final squad?

It wasn’t the prettiest finish, but the Boomers pulled off their biggest success since the Tokyo Olympics, claiming a second straight FIBA ​​Asia Cup title over the weekend after surviving to a heartbreaking final game against Lebanon.

But with that out of the way, all eyes now turn to the FIBA ​​Basketball World Cup, where Australia will be desperate to improve on their heartbreaking fourth-place finish in 2019.

In terms of roster, Australia will be in a stronger position than ever at the August-September tournament, with more top Australians in the NBA, Europe and even the NBL than ever before.

The current Boomers stalwarts are bolstered by young and exciting players such as Josh Giddey and Dyson Daniels, along with the ever-looming threat of finally securing a green-and-gold commitment from Ben Simmons.

But at this stage, no roster spot is finalized, and after dominating play during the Asian Cup tournament, a number of baby boomers will be pushing to stamp their 2023 tickets.

So which Asian Cup Boomers could we see competing for a spot in the World Cup roster?

The most obvious pick from this group is Thon Maker, the former No. 10 pick in the 2016 NBA Draft who earned All-Star Five honors at the Asian Cup after averaging 17.2 points, 8 .8 rebounds and 2.3 assists per game.

Maker was in the Boomers squad mix in Tokyo, before retiring from the competition and his play through that Boomers window has been that of a player ready to cement his place in the green and gold.

Currently a free agent, Maker has just completed a stint with G League side the Long Island Nets after playing five years in the NBA and one with Hapoel Jerusalem.

The 25-year-old is obviously keen on returning to the NBA, but he’s also been rumored to be in talks with several NBL teams, and if he can land in a good environment and put together a solid season, he’ll be a difficult player for coach Brian Goorjian and the selectors to pass.

This was McCarron’s second Asian Cup with the Boomers, who were part of the 2017 Championship squad, and his play in that campaign combined with his vastly improved NBL game – 7.6 points, 6.7 rebounds and 4.9 assists per game for Adelaide in 2021-22 – should see him squarely in the conversation for a World Cup squad spot.

Of course, he’ll be looking to carve out a place in a fairly stacked backcourt, with names such as Patty Mills, Matthew Dellavedova, Josh Giddey and Dyson Daniels more likely to eat up the majority of minutes at guard.

However, every Boomers team typically includes a number of high-profile NBL players, such as Nathan Sobey at the Tokyo Olympics, and McCarron’s style of play isn’t necessarily based on heavy use, making him a ideal presence in the locker room.

Tyrese Proctor is just 18, yet he has proven to be one of the Boomers’ steadiest hands in their Asian Cup championship run, averaging 10.5 points, 3 .5 rebounds and 1.8 assists per game.

By the time the FIBA ​​World Cup rolls around, he will have completed his freshman year at Duke University in the NCAA and will most likely have been drafted in the first round of the 2023 NBA draft.

This extra year of development, not to mention pure growth, will see Proctor blossom even more and come the World Cup, his game could be even more impressive.

Granted, he’s also competing for a spot in the aforementioned stacked backcourt, and Goorjian and the Boomers have already proven that being a top NBA prospect doesn’t guarantee a spot on the team, with Josh Giddey missing out. cup for Tokyo.

However, Proctor could be next in the ever-growing line of Australia’s elite guards, and will most certainly seek a seat on the plane to Asia.

It’s more of a bet on potential than any other pick here, but Will McDowell-White has truly thrived on the Boomers’ six-game sample, including a monstrous 15-point effort and seven assists in the semis against New Zealand.

At just 24, the Queenslander has long been seen as a prospect who had all the tools, and at the Asian Cup we finally saw him start to put them together.

If he can continue that development over the next 12 months, McDowell-White could most certainly enter the conversation as a dark horse contender for the World Cup.