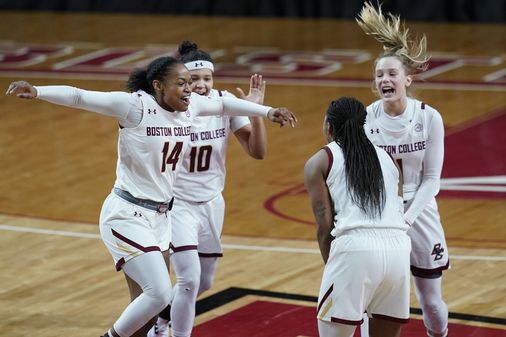 “As we say, five together is one on the pitch, and if everyone is playing to the best of their individual abilities, I don’t think there’s really a limit,” Bernabei-McNamee said. “I think we can be a really, really good ACC team and go to the NCAA tournament and really make some noise there.”

The latest sports headlines from The Globe delivered to your inbox every morning.

British Columbia most recently participated in the NCAA Tournament in 2006, the last of a streak of seven appearances in eight years between 1999 and 2006. British Columbia last won a conference tournament – ​​as member of the Big East – in 2004. The other six program entries were general nominations. BC reached the ACC semi-finals in the Bernabei-McNamee’s second season in 2019-20 and were hoping for a general bid before the tournament was canceled due to the pandemic. Last year, BC won its first round match of the ACC Tournament before losing in the quarterfinals.

“I think right now we have a mature, older team that knows what it takes to win big games,” Soule said. “It’s always good to go out on the road and compete and see where we compare.”

“We click really well off the pitch and that really helps a lot,” Swartz added. “It’s about coming in with intensity, being ready to play and being committed all the time.”

The third-seeded Minutewomen (23-6, 11-4 Atlantic 10) will travel to Wilmington, Del. for the A-10 tournament and received a double bye. UMass takes on the winner of Fordham and Saint Louis/George Mason Friday night at 7:30 p.m.

This year’s Minutewomen have already produced a record total of wins on the program, but sixth-year coach Tory Verdi told reporters last week: “I think we can play better than we have.”

A shorthanded roster of Minutewomen reached the conference championship last year on the back of who later became known as “The Savage Seven.” Graduate student Sam Breen, senior Destiney Philoxy, juniors Sydney Taylor and Angelique Ngalakulondi, sophomores Makennah White and Ber’Nyah Mayo, and rookie Stefanie Kulesza, who signed up midway through last season , are all back with an extra year of experience.

The seventh-seeded in last season’s tournament, the Minutewomen knocked out the No. 10, No. 2 and No. 3 seeds before falling to fifth-seeded VCU, 81-69, in the match of championship. UMass has made the NCAA tournament twice, in 1996 and 1998, both as general nominations. The Minutewomen are yet to win a postseason conference tournament.

“They work hard, are hungry and want to do something special,” Verdi said. “Hopefully we can finish and win a championship.”

Breen, the A-10 Player of the Year and Becky Hammon Mid-Major Player of the Year Award semi-finalist, leads the team in scoring (16.4 ppg) and rebounding (10.5). Taylor (15.9) and Philoxy (11.5) round out a trio of Minutewomen scoring in double digits.

“We reached the final last year and we didn’t win it. We want to go back,” Breen said. “I think we can win everything if we play like we know how. To do that, we really need to bond over these next few days, play together and do the little things.

Even if they don’t win their respective conference crowns, both teams have a chance to make it to the NCAA Tournament. All women’s varsity basketball teams in the division will learn their tournament fate on the Sunday, March 13 draft show.