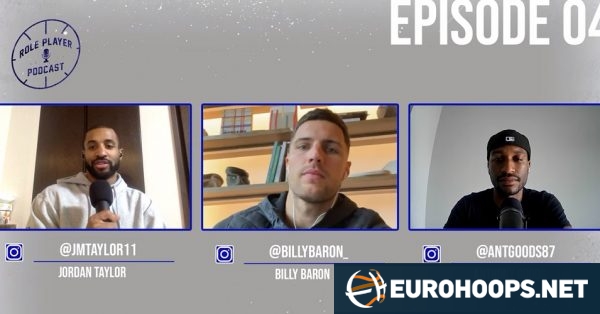 Billy Baron was the guest star on the latest episode of the Role Player podcast hosted by Jordan Taylor and Anthony Goods. The goalkeeper spoke about Zenit not finishing the Euroleague season, NBA opportunities for himself and other Euroleague players, Kevin Pangos’ trip to Cleveland, s… getting blown away by Vassilis Spanoulis, a rocky start to Crvena Zvezda, EuroLeague milestones, Russell Westbrook, Lebron James and many more.

The conversation started with Zenit and the whole situation surrounding the Euroleague, Baron’s contract and his future.

“I think this year, with what we had going on… We definitely had a shot at making the Final Four. Last year we were one game away and this year we were at the next level of our ability and potential. And it ended like that. We were about to play Barcelona, ​​we’re done with training and find out they won’t come. It all started from there and stopped, just like that. It was hard” he said and added.

“I signed a two-year contract before this season. Eventually when I got home and brought my family home, there was a lot of uncertainty. And that gives me anxiety and stress. I wasn’t sleeping well, it was just a lot of question marks. The team has my right and FIBA ​​doesn’t help us much. I don’t know if they’re going to be in Euroleague and I’m 31, I want to be in the Euroleague.

Baron also spoke about Vassilis Spanoulis and how he impressed him even before he started his career in Europe. Spanoulis’s clutch shots in the atmosphere of the Final Four leave him speechless.

“I started looking for him and fell in love with his game. I was watching all these shots he was hitting in the Final Four. The commentator going crazy, the fans going crazy, it blew my mind.

He also mentioned the transition from Europe to the NBA and how it’s situational, with some guys adapting while others don’t. But it’s also about the teams that bring them in. Some just don’t have the right opportunity and he thinks Pangos didn’t have one with the Cleveland Cavaliers.

“There are guys who made the transition to the NBA and it worked out, they’re still there. It’s curious to see what kind of games translate there. It’s not always on the player, the public always thinks that it is on the player that it did not work, it is never on the team. What kills me, it is guys like my team-mate Kevin Pangos who go to the league. And he can hoop. A little undersized for an NBA point guard but he can go for it.

For a substitute playmaker, he can shoot the ball, he can hit the right man, he knows what he’s going to do. Didn’t work on Kevin? First team All-Euroleague and all of a sudden he’s not spending the season with Cleveland and it’s his fault? I don’t think he was given the right chance, the right opportunity. He hasn’t played for a while and all of a sudden he starts. Casting someone who doesn’t play at all in a starter role and basing them on it? It’s wild to me.