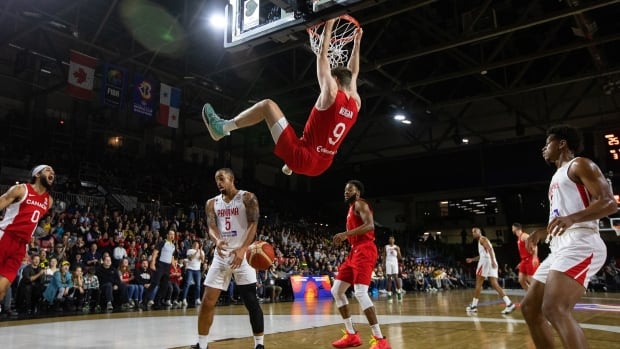 The Panamanian national team came to Edmonton with no illusions of grandeur. The players knew they were likely to lose their FIBA ​​World Cup qualifier against Canada. They knew they were probably going to lose a lot.

But, even though they knew they were overwhelmed, they were still impressed with the clinical and ruthless side of the Canadian team.

Panama coach Flor Melendez Montanez said he was happy the Panamanians were able to keep the Canadians close for a quarter and a half, but after that “they just destroyed us”.

Canada remain the only team undefeated in the Americas zone in FIBA ​​Basketball World Cup qualifying, having beaten Panama 112-71 on Sunday in Edmonton.

Canada, now 10-0, qualified for the FIBA ​​Basketball World Cup 2023 on Thursday with an emphatic win over Venezuela.

Canada is the only undefeated team in the Americas. This is something the basketball giants of the United States, Brazil or Argentina cannot boast of.

“That says a lot about Team Canada,” said associate head coach Nate Bjorkgren. “And, I’ll tell you this: we’re talking about 10 of them, and we had the same approach for all of them. The focus, the continuity of this group, they step in and I wish we could be together more a long time. It goes very quickly.

Panama move to 2-8 and find themselves bottom of the qualifying group.

Panamanian veteran guard Trevor Gaskins, who grew up in the United States and played college ball with Ole Miss, said his team could learn a lot from the way Canada dismantled them.

Canada managed to develop continuity and a 10-game system, despite the fact that the roster fluctuates from window to window, as NBA players are only available for a small number of FIBA ​​windows. No NBA players were available for the Edmonton window.

But the depth group filled out admirably. Canada was led by a 22-point performance and two assists from Aaron Best. Kassius Robertson had 13 points and three assists.

Panama got 14 points and nine rebounds from Ernesto Ogilvie.

After the match, Bjorkgren praised Best, who won a CEBL title in 2022 with the Hamilton Honey Badgers.

Canada beat Panama in an entirely different way from how it beat Venezuela. Against the Venezuelans, the Canadians dominated the cup, and extended possession with offensive rebounds. On Sunday, Canada didn’t need to be great rebounders, they were just great shooters.

As a team, Canada shot 53 percent against the Panamanians, while holding the visitors to a 39 percent shooting accuracy rate.

Canada’s 12 players are listed on the score sheet.

“It’s always fun to play well, execute and do the things you want to do,” said Canadian forward Melvin Ejim, who had 12 points. “We went out, we executed our game plan, we did what we wanted to do and we were able to enjoy it.”

Sunday’s game had the feeling of a post-qualifying celebration. A 10-0 streak late in the first quarter affirmed Canada’s dominance, and fans were treated to the thrill of seeing a Canadian team attempt to score some baskets like it was an all-star game.

I felt like every time Canada fell apart, the home team was interested in putting on a show.

Trae Bell-Haynes gasped the crowd when his cross dribbling left Panamanian defender Eugenio Bocaz on the ground. Center Connor Morgan finished off a circus pass from Kassius Robertson with a thunderous dunk. Melvin Ejim launched a thunderous dunk after a quick break. Thomas Scrubb threw a cross fastball to his brother, Phil Scrubb, who passed it to Robertson for a three. Jean-Victor Mukama kicked a dunk after rising above the rim for a rebound.

“With the continuity that we’ve been able to establish within the group, you get an idea of ​​the guys,” Best said. “You know where some guys are going to be, you know where some guys like the ball and when we get that kind of synergy, and we play defense like we do, it makes everything easier for everybody, offensively. is why you see the alley-oop plays and the backdoor cuts and all that.”

For a group of Canadian players who don’t play in the NBA, who aren’t household names, it was a chance to show just how deep this country is when it comes to basketball talent.

And, the Canadians rained down three-point territory, shooting a total of 19 from behind the arc.

The players all return to their club teams. Canada’s next FIBA ​​qualifier is scheduled for February 23, 2023, away to No. 4-ranked Argentina.