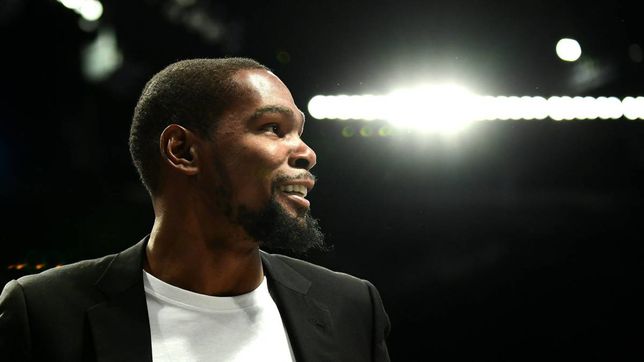 Durant amazed by EuroLeague: ‘Do it in the NBA and you’ll end up in the Rikers’

Brooklyn Nets star Kevin Durant was left in awe of the EuroLeague when he attended the quarter-final match between Olympiacos and Monaco at the Peace and Friendship Stadium in Piraeus. Durant attended the game to watch his friend and former Nets teammate Mike Jameswho plays for Monaco after being present for match 4 of the series in the principality.

The NBA superstar was amazed by the atmosphere at the Peace and Friendship Stadium despite his FIBA ​​international experience with the United States, with whom he played at World Championships in Turkey in 2010 and in Spain in 2014, as well as the Olympic Games. Actress Emma Stone was also present at the match, invited by Greek director Yorgos Lanthimos.

As well as flares in the stands and a loud crowd during the gamefans also swarmed onto the pitch before the end of regulation time, and the EuroLeague announced it would open an investigation into the events.

Durant on Olympiacos-Monaco: “The apocalypse”

“The apocalypse,” Durant said on social media as he watched the mayhem from the stands. Responding to a message from a fan, Durant replied, “Bring a flare to an NBA game if you want it and you could be in the rikers,” in reference to New York jail.

Olympiacos won the game and the series to become the last team to qualify for the EuroLeague Final Four, where the Greek team will face defending champions Anadolu Efes of Turkey. The other semi-final will be a 100% Spanish case disputed between Barcelona and Real Madrid.