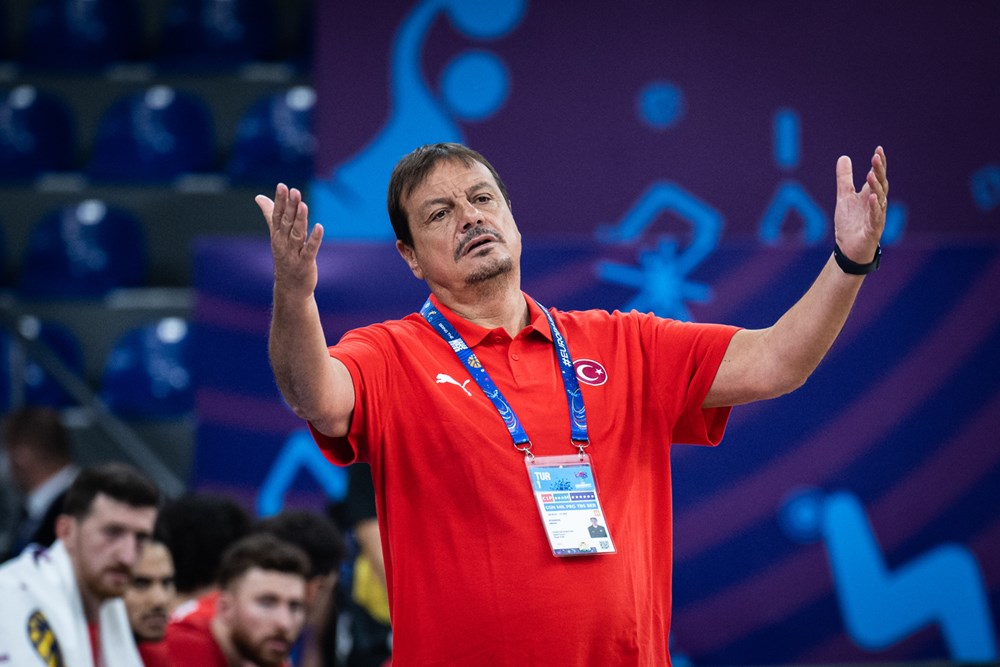 Ataman addressed Furkan Korkmaz’s fight in the tunnel, Turkey’s protest over losing 22 seconds in the game, Cedi Osman’s technical foul at the end of second overtime and his sending off.

“The biggest organization in European basketball, EuroBasket… what happened on the court and in the locker room is a scandal. After the disqualification of Furkan Korkmaz, he went in the locker room with a member of our staff, but three Georgian players… What I am told is that it was [Tornike] Shengelia, [Goga] Bitadze and the expelled player (Duda Sanadze)who directly attacked Korkmaz in the locker room.

And our staff member was also affected. He descended. When the match ended, I went to my locker room, and I saw that Furkan Korkmaz was in the coach’s locker room. They protected him in the locker room and put him there. It is a scandal. Everything is scandal here, starting from our arrival in Georgia. Every day, especially day one and day two, we got there with 40-45 minutes of traffic in training or on game day.

At the hotel there is no special food for athletes. Alright, that’s good, but FIBA ​​has to protect the players in the game. What happened yesterday is a scandal. At the end of the match, while my players were going to the dressing rooms, the local police attacked my players. They tried to push us into the locker room and they attacked our [federation’s] vice-president. Everything is amazing.

It’s a party. The other part, during the match, we played 22 seconds less. It’s a basketball game. If the game is in overtime and we have the last ball, we only had the ball for two seconds.

We tried to complain to the referees during the game, and they said: “No problem”. Then, immediately after the game, we make our official protest because 22 seconds is a long time in a basketball game. Now we are waiting for FIBA ​​to come up with a strategy to cancel the game or let the game go on for 4.5 minutes.

Otherwise, it’s something really ridiculous. About my ejection from the game, the referees gave an unsportsmanlike foul to Cedi Osman for a small tactical foul, and it’s also ridiculous. I deserved to be disqualified because I made a long claim for this call that you call in second overtime, in this kind of game.

This is a ridiculous unsportsmanlike foul. I complained about the call, that’s what happened here. It’s a big shame for world basketball because these players came here to play basketball.

We came here to play sports, not to make war on anyone. Also, it’s a big surprise that players who have careers like Shengelia, Bitadze come to the locker room and attack my player, Korkmaz. It’s a big surprise for me,” Ataman said.

Although Korkmaz is fine physically, Ataman said it could affect the whole team mentally.

“You have seen the practice. The psychological [aspect] of my players is not good now, especially that of Korkmaz. He’s an NBA player. Imagine that happening in the NBA,” Ataman said.

Turkish Basketball Federation Vice-President Omer Onan has claimed that Turkey will quit EuroBasket if necessary footage of the tunnel incident is not provided.

“If the footage from the security cameras does not reach us, we will leave the tournament,” Onan said in an official statement.

When asked if Turkey had received such images, Ataman did not have the answer. However, Turkish NT press officer Baris Kuyucu confirmed to BasketNews that the Turkish delegation is still awaiting CCTV footage of the incident between Korkmaz and members of the Georgian national team.

However, Ataman confirmed that currently Turkey is not seriously considering withdrawing from EuroBasket.

“No, we are not considering leaving the tournament,” Ataman told the media. “Of course, if it continues, how can we play basketball? We spoke with other teams, they complain too.”

“Everyone is complaining [different] situations. I spoke with the Montenegro staff yesterday and with Sergio Scariolo. Everyone complains. Of course, if we don’t have security, we will think about [withdrawing from EuroBasket].

“Our government called me today, as well as Turkish FA President Hedo Turkoglu. Everyone is involved now. Firstly, we need the safety of our players here. The police cannot come to the changing rooms and attacking our players or staff members,” Ataman added. .

It wasn’t the only moment that caused heated moments or controversy. Turkey also protested to FIBA ​​because in the Korkmaz-Sanadze incident 22 seconds were lost and never recovered.

“FIBA told us they had 24 hours to respond. [to our protest]”, Ataman said.

At the AmeriCup, USA Basketball is caught in a rain delay | NBA