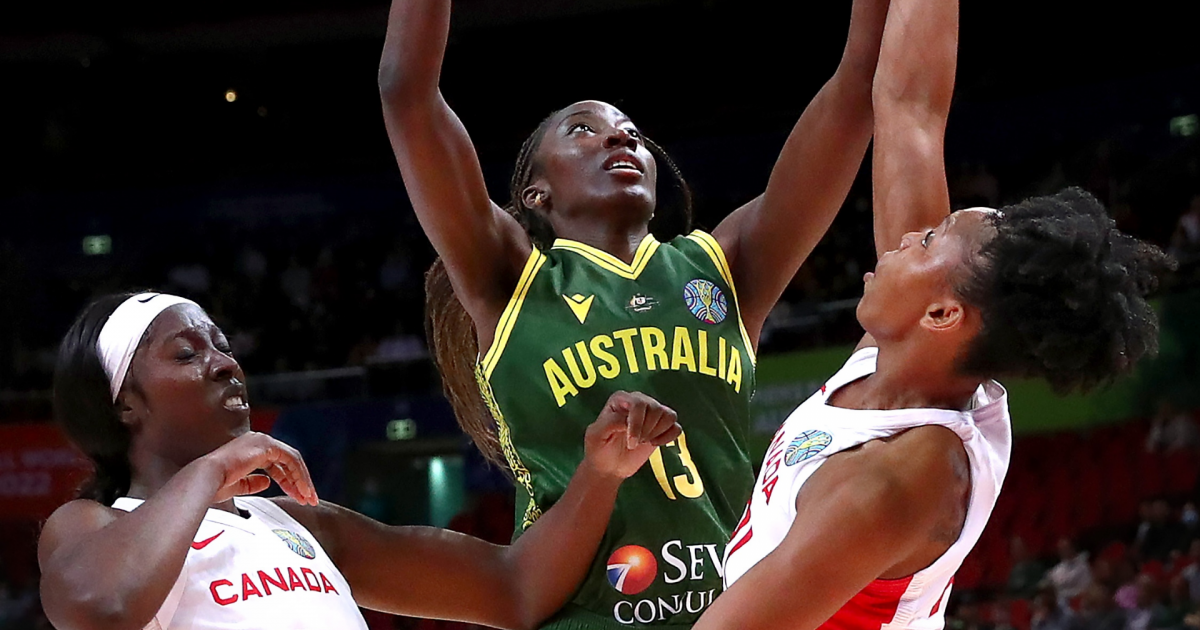 Australia’s Opals secured their place in the FIBA ​​Women’s World Cup Quarter-Finals with a hard-fought 75-72 win over Canada at the SuperDome in Sydney.

After trailing by as much as 14 points in the second quarter, the Opals dug deep to claim an impressive comeback victory, led by great performances from Ezi Magbegor, Sami Whitcomb and late game heroism from Steph Talbot.

Magbegor led the Opals with 16 points, while Whitcomb had 15 points, six assists and four steals and Talbot flirted with a triple-double, finishing with 11 points, nine rebounds and eight assists.

With Australia, Canada and France now in a Group B stalemate, we break down the key takeaways from tonight’s competition and the road ahead to the quarter-finals.

Ezi Magbegor found herself out of the starting lineup against Serbia and Canada in favor of Marianna Tolo, but she responded forcefully, with a powerful two-way display tonight against Canada.

“When things aren’t going your way offensively, you have to find other things to do to get you going,” Magbegor told reporters after the game.

“It’s blocking shots or getting steals, rebounding, so finding those moments to impact the game and I guess that definitely gives you confidence and also gives my teammates confidence to keep the game going.”

“Ezi was fantastic tonight, we needed everything from her,” she said.

“Hopefully we can build momentum and we just have to wait and see, we still have to win tomorrow and see where it takes us.”

Natalie Anchowa’s free throws gave Canada a 33-19 lead with four minutes left in the second quarter, before the Opals clinched a 19-0 run, going into the half with a 38-33 lead .

Australia’s offense struggled to create shots early against Canada, but their slick ball movement stretched Canada’s defense going into half-time, with every bucket in the pivot run assisted, at the great pleasure of Coach Brondello.

“Making sure we move the ball to get the best shot possible and know the strengths of each of our players.”

Despite Australia’s momentum, Canada regained the lead with 6:41 to go thanks to a hat-trick from Kia Nurse, but from there it was all Australia, with Whitcomb and Talbot combining in defense to help the Opals settled things at 63-63.

From there Australia tightened the screws with Magbegor netting a steal, two free throws and two extra blocks in the space of three and a half minutes to give the Opals a handy buffer.

We can’t hear each other in the media box because of how LOUD it is here.

While the Opals’ ball movement generated a ton of buckets, it was their restlessness and energy on the defensive end in key stretches that swung the game in their favor as they hunted down players from the perimeter of the Canada and used their inside size to push them away from the rim, forcing multiple shot clock violations, just like they did against Serbia 24 hours earlier.

After tonight’s game, Australia, Canada and France find themselves in a three-way tie at the top of Group B, which means the final games of the group stages take on even more significance, each team with a 3-1 record.

Currently, Canada leads the group with a +11 head-to-head point differential, while France is second with -1, while the Australians are third with -10.

Australia need Serbia to beat France to give them a chance of a top two finish in the group, however, if France win and the Opals beat Japan, the Australians will slip to third place due to the tiebreaker.

Canada will face Mali in their final group game on Tuesday at 4:00 p.m. (AEST), followed by France against Serbia at 5:30 p.m. and Australia against Japan at 8:30 p.m.