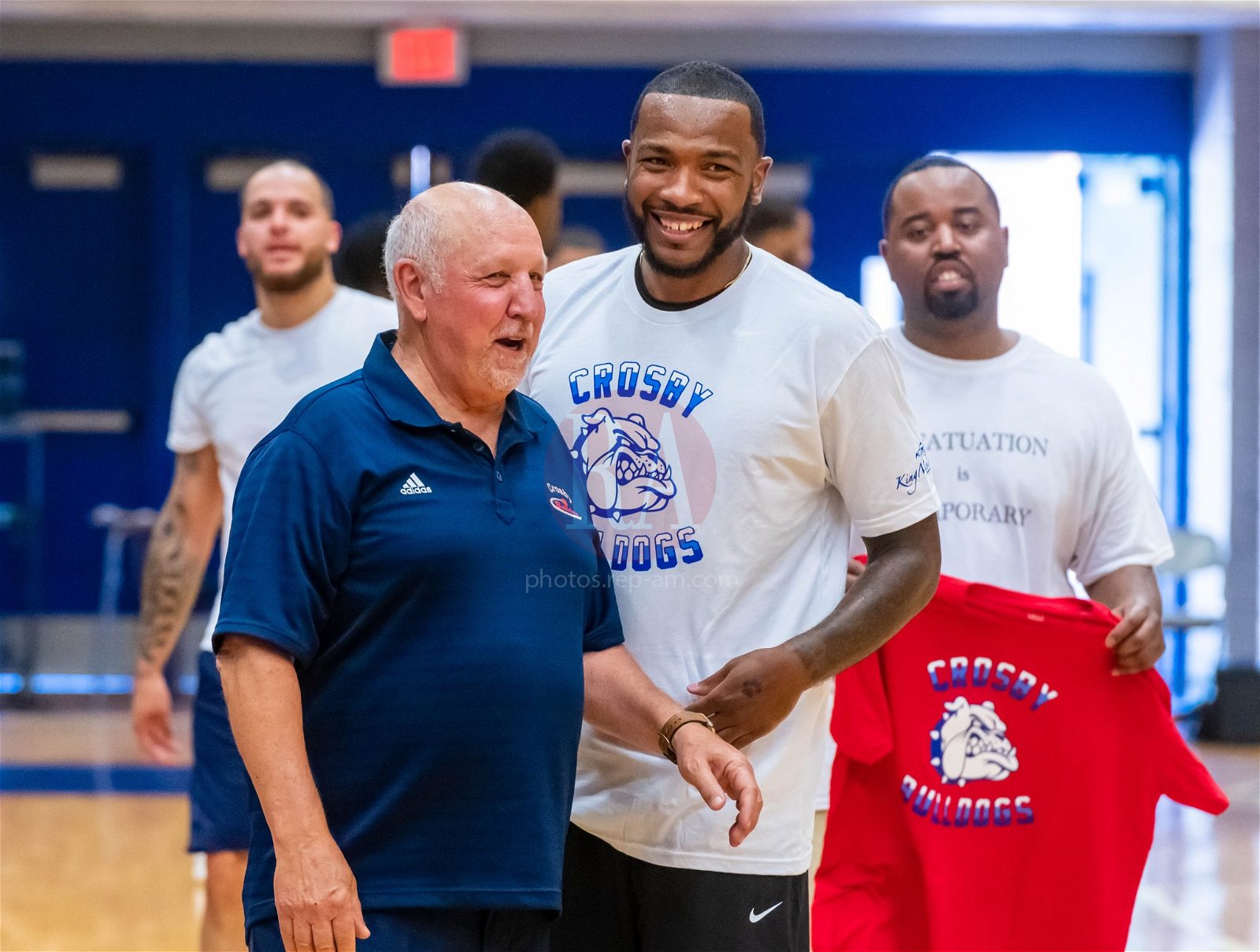 BY KEVIN ROBERTS
REPUBLICAN-AMERICAN
WATER OFFICE [Dash] Crosby High School Reunion’s first alumni basketball game turned out to be a great success.
A good crowd showed up at a stuffy Crosby Palace and watched several generations of former Bulldogs show off what made the men’s basketball program such a great talent pool. Anthony Ireland organized the game and served as its host. The Class of 2009 graduate and current professional basketball player was thrilled with what happened.
“A great first time. Like I said before, I was touched by the love and everyone coming together. It was just awesome. People from every generation,” Ireland said after Team DeVito beat Team Augelli, 132-116. Ireland played for the DeVito team.
Ireland continued: “My generation, the older generation, the younger generation, it’s just beautiful to behold. That says a lot about what Coach Augelli, Coach DeVito and Crosby have established.
Damian Saunders, Class of 2006, thought back to his time at Crosby.
“It’s like waking up and playing all day again in high school. It’s all of our home, but for some of us it’s really special,” Saunders said. “Championship teams, we look at this place as our Dog Pound. We must defend it, whether you are here or not, or in spirit.
The afternoon began with Ireland addressing those gathered. A 3-point contest followed, which was won by Justin Davis (Class of 2020). Davis defeated Jason Johnson (Class of 1997), LaVar Moore (Class of 2008), James Vassar (2002), and current Crosby manager Mike Veronneau (Class of 1999) also entered the contest.
Head Coach Nick Augelli and Assistant Coach Larry DeVito received the inaugural Nick and Larry Award, given to those who have had a positive impact on Crosby. Augelli and DeVito then turned and practiced against each other. The teams, which were created by a draft, were presented before the game.
The composition of each team made for some interesting clashes where former teammates found themselves on different sides. For example, Saunders wore a red t-shirt for Team DeVito while James “Bootsy” Moore donned a white t-shirt for Team Augelli. Saunders and Moore were on the 2005 state championship team together.
“It’s different. I’m a bit used to my guys, my guys from 2005, but at the same time we play in so many local tournaments against each other,” Saunders said of playing against a former teammate. “Just being here on the same team or competing against each other is nothing but love and fun.”
Once the game started, it was a wide mix of 3-pointers, dunks, smiles, laughs and chatter, all to music, that provided entertainment. Ireland made the first basket of the match on a 3-pointer from the left wing.
“It’s amazing. We share so many connections and so many memories over the years, it’s just a humbling experience that we can achieve this stuff,” Ireland said.
Kerwin Prince (Class of 2020) was named Most Outstanding Player. Returning to Crosby reminded Prince of the success and good times he had as a Bulldog.
“It’s like a family,” Prince said.
Prince was far from the only one to stand out. There was Prince and Jeremiah Kendall (Class of 2017) who came through the lane for dunks for Team DeVito, with Prince delivering a great comeback game on an Irish miss. Davis, Lex Perez (Class of 2014) and Jose Soares (Class of 2020) joined Bootsy Moore in shooting from three-point range for Team Augelli.
All in all it was a fun afternoon of basketball, and Ireland want to do it again and again in the future.