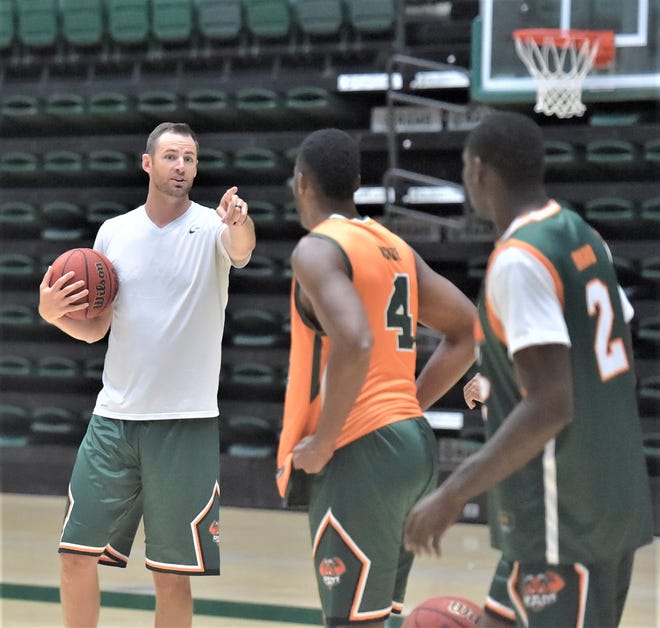 When Jason Smith got the call, he was eager to get back on the basketball court with other former Colorado State players.

His 12 years of NBA experience — not to mention his 7-foot frame — would certainly be a welcome addition to the squad of former Rams that Derrick Stevens was assembling for the basketball tournament — a 64-team squad at Knockout, $1 Million Win-Win Event.

“I was excited. I wanted to get back on the court,” Smith said Monday during a Team Ram Up practice at Moby Arena. “But at 36, 12 years in the NBA has impacted my body. …I tried, but my body said ‘no’. ”

So instead of playing, Smith is serving as an assistant coach for the team Stevens has assembled for the tournament which begins this weekend with matches at eight regional venues. The Ram Up team, which includes former CSU players Andy Ogide, Emmanuel Omogbo, Prentiss Nixon, Kris Martin, JD Paige, Che Bob and Kaipo Sabas, begins play at 1 p.m. Monday (ESPN3) against the LA Cheaters at The Pit in Albuquerque, New Mexico.

Stevens, a CSU team guard who won the 2003 Mountain West Tournament for an automatic berth in the NCAA Tournament, filled the remaining spots on the Ram Up roster with Ibrahim Sylla, who played in Northern Colorado; Alex Holcombe, who played at four schools, including Dallas Baptist in college; and former Liberty player John Dawson.

Stevens, 42, has coached in the NBA G-League and a professional league in China and serves as the team’s general manager. Former CSU center Nico Carvacho, who is recovering from surgery to repair a torn ACL, is also an assistant coach this year but hopes to play for the alumni team in future years.

Team Ram Up will wrap up its six days of practices in Fort Collins with an intra-squad public scrimmage and 3-point shooting and dunk contests at 6 p.m. Thursday at Moby Arena. The tickets are $10 each and available online.

Smith, a Kersey native, was Mountain West’s freshman at CSU in 2004-05 and an all-conference first-team selection the following two seasons. He skipped his senior year to move to the NBA and was the 20th overall pick, selected in the first round by the Miami Heat. He played 12 seasons with six NBA teams before retiring in 2019.

“He’s my alma mater,” Smith said. “I love Colorado State. I was born and raised in Colorado, and I always like to give back to the basketball program as much as possible. Also, being here kind of gives the opportunity for these guys to ask questions about the professional level, to ask questions about what it takes to be a professional, I can kind of give them advice on what they can do best.

Smith, who works as an NBA TV analyst on NBC Washington shows, left a family vacation early on the Jersey Shore to lend a hand to the first team of former CSU players to compete in a tournament that has previously won by alumni teams representing Notre Dame, Ohio State, Marquette and Syracuse. A team of former University of Colorado players made it to the title shot in 2016.

“We’ve talked about doing this for years, but we just haven’t had the talent to come out,” Smith said. “Now with Niko (Medved) in charge of the program – he hadn’t even taken a recruiting course yet and he got a 20-win season – it kind of opened our eyes.

Opinion:Realistic (and not) realignment possibilities for CSU after USC and UCLA shakeup

The winners of each of the eight regionals advance to an eight-team championship bracket from July 28 to August 28. 2 in Dayton, Ohio.

“It’s a big deal as far as ESPN is concerned, and it works really well and things like that,” said Ogide, a 6-8 striker who has played professionally abroad, mostly in Europe, over the past few years. last 11 years. “I always wanted to play there and was hoping to make a CSU team, but Derrick beat me to it.”

Players don’t really know what to expect on their first TBT together. But they plan to keep the team for future tournaments.

“Obviously we’re trying to win, but we’re going to keep building on that,” said Omogbo, a 6-8 striker who played professionally in Cyprus and Israel last season and in the Nigeria national team. at a recent tournament. . “This is our first year; you don’t get it all in one day.

“We’re going to come in this summer, come in next summer, bring in more guys and hopefully we can do something big in there.”