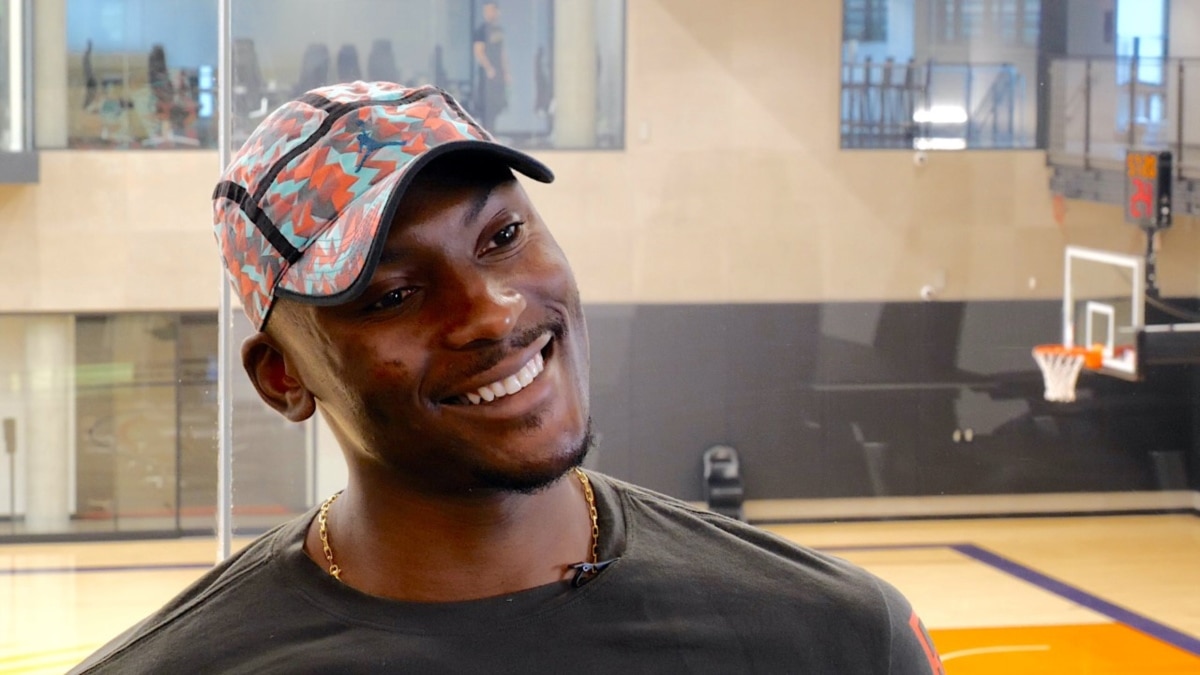 Growing up in the Democratic Republic of Congo, Bismack Biyombo dreamed of playing professional basketball in the United States. His dream has come true since he was drafted into the NBA over a decade ago. But what he does off the pitch gives a noticeable help to his home country.

The 29-year-old center of the Arizona Phoenix Suns describes himself as “a child of Africa” ​​who “walked onto a basketball court at the age of 13 in Lubumbashi”, a large city in the southeast of the DRC. “And I was lucky to have, you know, parents who were supportive of me,” he told VOA in an interview at the Suns’ practice facility earlier this spring.

Biyombo credits his father Francois Biyombo and mother Francoise Ngoy with nurturing a spirit of determination and generosity. They sacrificed themselves to ensure the eldest of their seven children could play basketball, including when he went to Yemen at 16 to try out for a local team, and later when he joined a club league in Spain. After Biyombo was drafted into the NBA in 2011, they encouraged him to give back.

He has. Bismack Biyombo has donated time and millions of dollars to support education and health care in the DRC, largely through the eponymous foundation he established in 2017 in Florida. (Before joining the Phoenix Suns for the 2021-22 season, he played with the Orlando Magic – also in Florida – as well as the Charlotte Hornets in North Carolina and the Toronto Raptors in Canada.)

Biyombo largely funded the International School of Kivu, which opened in Goma in 2017. “Every year we award more than 150 scholarships in the DRC and the United States,” he said in a video clip published on the foundation’s website. The foundation has brought more than 60 students from the DRC to the United States to study, he told VOA. Biyombo also organizes free basketball camps each summer in the DRC, equipping young people with new skills, sports shoes and other equipment.

“My job is to inspire children across Congo and make sure we give them all an equal chance,” he said in the VOA interview.

Biyombo’s foundation has supported Congolese mobile clinics and the modernization of public health facilities. It has also provided health care equipment worth hundreds of thousands of dollars, including face masks and hazmat suits, to help fight the COVID-19 pandemic in the DRC.

“And now we have set bigger goals and we are going for it,” Biyombo said.

This includes building a Lubumbashi hospital in honor of his father, who died last August at age 61 of complications from COVID-19. Biyombo announced earlier this year that he would donate his salary for the 2021-22 season — $1.3 million, according to his foundation’s website — to this mission.

“I want to build a hospital for my father that will continue to serve people because he believed in one man, and that is me,” Biyombo said. “And now we can do it for him.”

Such humanitarian gestures are straight out of the playbook of retired NBA great Dikembe Mutombo, a Congolese player who, according to Biyombo, is “like a big brother”.

Mutombo, who hung up his jersey in 2009 and was inducted into the Basketball Hall of Fame six years later, started a foundation in 1997 to help people, especially those in his native DRC. The projects of this foundation include the construction of the Biamba Marie Mutombo hospital in his hometown of Kinshasa.

Dr. Joseph Nsambi Bulanda, minister of health for Haut Katanga province where Lubumbashi is located, told VOA that his government appreciated Biyombo’s offer of a new hospital. Construction has not yet started.

“We can give him some advice,” Nsambi said, noting that his government aims “to improve and enable all Congolese and all people in the province of Haut Katanga to have a very good health system.”

Nsambi said of Biyombo: “He is a very good-willed person.” He added that his country’s public health system – one of the poorest in the world – was welcoming help. “We need people. We need organizations.

Biyombo’s generosity has earned him accolades. TIME named him to its 2021 list of Next Generation Leaders. The NBA and health care provider Kaiser Permanente honored him this year with a “community cares” award – and a $10,000 check for his foundation – for his efforts on behalf of the DRC.

The athlete wants others to benefit from basketball, as he has.

“So many young African-American leaders [are] now coming into the NBA, I think the future for Africa there is great,” Biyombo said. He also spoke about the Basketball Africa League, a partnership between the NBA and the International Basketball Federation (FIBA).

“The reality of the league,” Biyombo said, “is that I think a lot of these kids have the opportunity to stay home” and continue to thrive in the sport.

“You know, most kids want to find a way to escape from what’s going on in Africa,” he said. “And you have to give them a reason to stay. I think that’s one thing that motivated me to invest so much in the younger generation. … The more tools we can give the next generation, the more they can solve the problems we face today.

“There is an opportunity to have an impact,” Biyombo said. “And I don’t want to waste it.”

Eddy Isango of VOA Lingala contributed to this report.

2022 NBA Draft: Could Johnny Davis be next in Team USA’s Cleveland Cavaliers pipeline