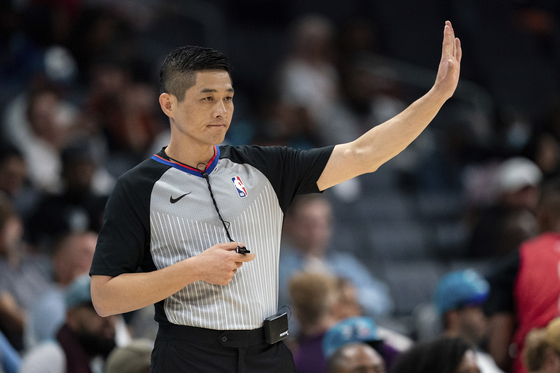 Hwang In-tae signals in the first half of an NBA preseason game between the Charlotte Hornets and the Washington Wizards in Charlotte, North Carolina on October 10. [AP/YONHAP]

Hwang In-tae became the first Korean to referee an NBA game on Sunday, appearing as an assistant as the Phoenix Suns took on the Houston Rockets at the Footprint Center in Phoenix, Arizona.

Sunday’s game marked Hwang’s first appearance as an assistant referee in an official NBA regular season game, having officiated an exhibition game between the Charlotte Hornets and the Washington Wizards on November 10.

Hwang trained as a referee with the Korea Basketball Association in 2004 and worked in the Korean Basketball League from 2008 to 2019, refereeing a total of 466 league games.

He started to attract attention when he was selected by the International Basketball Federation, FIBA, to referee a number of international games, including the final of the women’s competition at the Rio 2016 Olympics.

Over the past two years, Hwang has accumulated experience in the G League, the NBA’s minor league, before earning official NBA refereeing qualifications.

“The NBA was just my dream,” Hwang told The Associated Press. “I watched it on TV, didn’t I? That’s it. I never, ever tried to get into the NBA on my own.