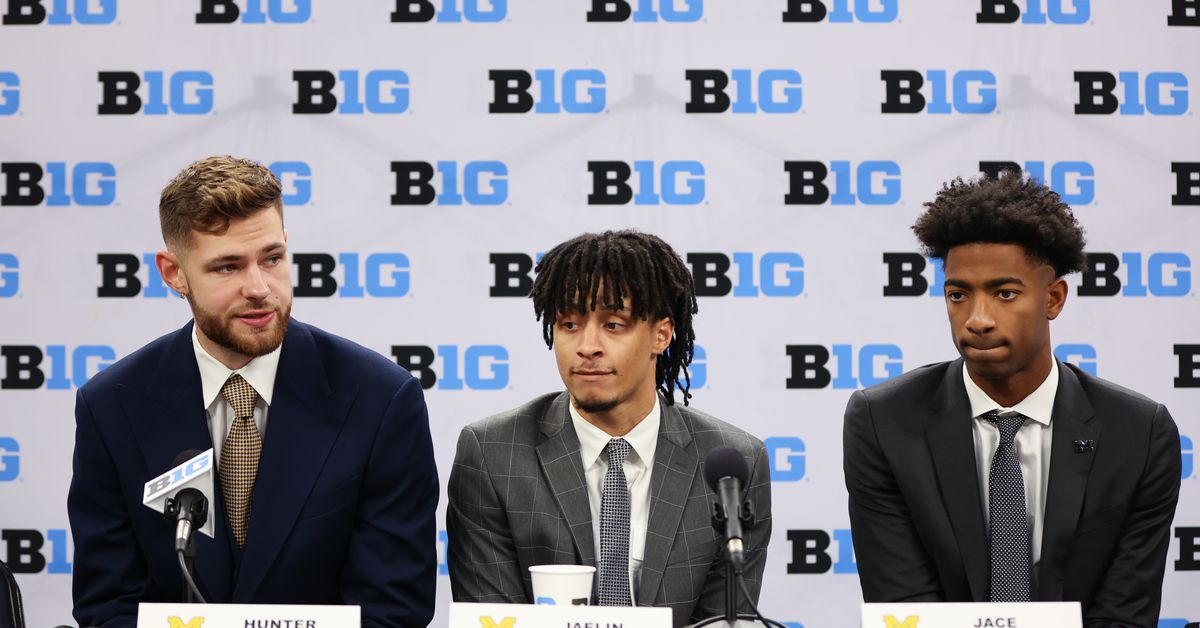 Earlier this week Hunter Dickinson, Jaelin Llewellyn and Jace Howard of the Michigan Wolverines men’s basketball team spoke at Big Ten Media Day. These three are the captains of this year’s team and had quite a bit to say to the media on Wednesday.

Here are some takeaways:

Jaelin Llewellyn: “I think it was a great experience, there’s a lot of great talent there. You play against professionals and they are grown men and they have a lot of strength, but it was a good opportunity to see where we were and start the season.

Hunter Dickinson: “I think it was really good for us, to be able to get games so early in the season, to give a sense of where we are and where we need to be. I think our first match in France allowed us to face reality a bit. We still have a lot of work to do. Luckily, there’s still about a good month before the start of the season and we still have time to polish some things. I think it was a great overall experience for us to grow together on and off the pitch.

Jace Howard: “Going back to what they said, it gave us an opportunity to see where we were at as a team. But I also think it put us ahead of schedule, especially ( compared) to previous years, you’re in August playing against professional teams. You’re not playing against a team, at best, until late October for a scrimmage, and that gave us a two-month lead. J feel like that definitely gave us a gauge and now we know what we needed to do, and I feel like every day we’re going to practice and execute it. We have different things that we want to address every day, whether it’s games, ball screen defense I feel like if we keep doing that, improving by one percent every day, that certainly makes us excited for the season.

On Hunter’s decision to return to the University of Michigan

Dickinson: “I think it was a lot easier this year than last year. I feel like with this year, I wasn’t quite done with college as a whole. I feel like there was even more for me to do here. I’m really enjoying my stay in Michigan, it makes it easy for me to come back. I really like being at the University of Michigan and I feel like I have more to do here.

On how NIL played into his decision to return

Dickinson wasn’t shy about his feelings on NIL here in Michigan, and he said it was definitely a comeback factor for his junior season.

“It definitely made it easier,” Dickinson said. “I think without NIL it definitely would have been a harder decision to make, but now with the ability to earn money while you’re still in college, I think it definitely helps my decision and other guys like me.”

Dickinson also likes that the university has made progress overall, devoting more resources to NIL to help players.

“I would say we’ve grown a lot since the University of Michigan with NIL,” Dickinson said. “I think at first it was like they weren’t trying to kiss her. I think now that we’ve been at it for a year Michigan knows they need to embrace it more because that’s what college basketball and college athletics is at this point so I think we are doing a better job of adapting but there is still plenty of room to grow.

Associate Head Coach Phil Martelli talked about it in a podcast over the summer that I highly recommend listening to on Defend The Block. It seems like Dickinson has really come to terms with being a leader and has learned a lot from his former teammates.

“My role has definitely changed a lot over my three years,” Dickinson said. “I came into first year just wanting to be a sponge and soak up all the information from my older teammates since we were a really experienced team my first year.

“Now that I’m a junior – now that I’m a leader for the team in some ways, I’m someone the younger guys look to for advice. Luckily I have guys like Jace and T -Will who are here and know the system but I also have guys like Jaelin and Joey (Baker) who are super old – they bring a lot of experience and leadership Jaelin and Joey have played a lot of college games , so they have a lot of experience that younger people can look forward to and ask for help.

I wrote about it with an advanced stat breakdown earlier this summer, but Llewellyn will be integral to what Michigan does this season as a grad student with a lot of college basketball under his belt.

“It was a smooth transition,” Llewellyn said. “I played a lot of college basketball and basically tried to get the flow off the offense and figure out how to gel with the guys on the team, and I think it’s pretty fluid so far. ‘ now. Playing abroad definitely helped us because it gave me the chance to vent the first time I was playing with a new team and stuff like that, but I think I fit in well .

“Little has changed,” Jace said of his positional flexibility. “Some days I play 4, some days I play 3, some days I even get reps at 2. For me it’s about being ready when my name is called, just learning all the positions and plays and stuff like that. I feel like my role in the team is to be an all-around guy, and that’s probably going to extend this year in terms of what they’re going to ask me on the plan. defensively – keeping their best player and that’s something I embrace.”

Jace on playing with his brother, Jett Howard

“It’s been awesome, Jett is a talented guy,” Jace said. “Great guy to be around. To be in a setting where we both play for a school we love and a school we grew up watching is pretty surreal. He’s full of talent, so being able to teach him the game and the little tips here – it’s really fun to brainstorm and tackle each other. We’ve been paired up a lot in training, he knows my moves, I know his moves, so it’s been a great experience so far.

Jace isn’t the only one excited to no longer be the only Howard on the list. His dad, Juwan Howard, spoke about Jace’s improvements and training his two sons earlier this summer.

The funniest answer of the day

Hunter Dickinson and Jace Howard were asked if they could have another Big Ten player as a teammate, who would they want.

Without hesitation, and a laugh, the two replied, “Terrance Shannon.”