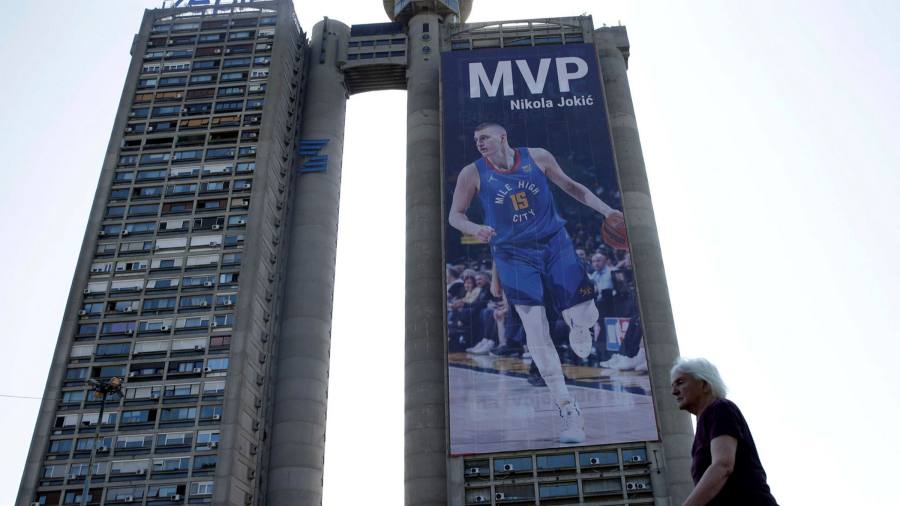 The Denver Nuggets basketball team released last week a video from a recent trip to Sombor, Serbia. Gathered beside a barn, people cheered to the sound of folk music as they greeted a tall man riding in the back of a horse-drawn cart.

It was the near-official reception for Nuggets center Nikola Jokić, who last week became the fourth foreign-born player to win the US National Basketball Association’s Most Valuable Player award multiple times. This year, for the first time since the league announced the MVP finalists, all three contenders were born outside of the United States. The award has been given to an international player for each of the past four years.

The success of international basketball players is the result of a decades-long effort by the NBA and other American professional sports leagues to export their products and grow their fanbases as effectively as world football.

The NBA has invested in talent scouting and development around the world and worked to expand local language media rights from Asia to Africa to Europe and beyond. Rival American professional leagues, including the National Football League and Major League Baseball, have also stepped up efforts over the past year to expand their overseas presence, in some cases emulating the NBA model.

Mark Tatum, the NBA’s deputy commissioner and chief operating officer, said international business accounts for about 10% of league revenue that officials expect to reach $10 billion for the 2021-22 season.

The international share has more than tripled over the past 15 years. China accounts for the lion’s share of revenue outside North America at around $400 million, a figure made public after fallout from a 2019 tweet about Hong Kong by a team executive. The league does not distribute revenue from other regions.

In the home territories of the three MVP finalists – Jokić of Serbia, Joel Embiid of Cameroon and the Philadelphia 76ers, and Giannis Antetokounmpo of Greece and the Milwaukee Bucks – regional subscriptions to the NBA League Pass streaming platform increased by 17% , 40 percent, and 9 percent year-on-year, respectively, according to Tatum.

Getting to this point is the result of decades of planning and exposure. This year’s crop of MVP finalists are a generation removed from the “Dream Team” of the 1992 Olympics in Barcelona, ​​where the dominating play of big names such as Michael Jordan and Larry Bird introduced millions to basketball. NBA-style ball.

Their fame eventually led to the establishment of various grassroots talent development programs by the NBA and the international basketball federation, FIBA, including Basketball Without Borders.

Embiid would have been the first BWB alumnus to win the MVP trophy, according to Troy Justice, NBA vice president and chief international development officer. He finished second in the overall vote for the award.

“When Embiid was on the program, we wouldn’t have expected him to be an MVP candidate,” Justice said, noting that “the best players in the NBA are usually late developers, not early developers.”

In Milwaukee, where Antetokounmpo won the Bucks’ first league title in half a century last year and won back-to-back MVP trophies, executives talk about what they call the ‘Giannis effect’ on a once franchise. behind.

When current ownership acquired the Bucks franchise in 2014, “it was probably the most struggling asset in professional sports – or certainly the NBA – by any type of measure,” said Peter Feigin, president of the ‘team. With less than one million residents, Milwaukee is the league’s third-smallest franchise market, according to Sports Media Watch.

“What Giannis did was reverse the funnel,” Feigin said. “Now there is this opportunity to really be the world team, which we are looking for.” Antetokounmpo, whose parents migrated to Greece from Nigeria before he was born, enjoys a following across the board and last week prompted the league to select the Bucks as one of two teams to play the first-ever game. of the NBA in the Gulf, where they will face the Atlanta Hawks in an exhibition in October.

Also last week, MLB announced the formation of a long-term partnership with London to host professional baseball in the British capital for the next five years. The efforts follow an earlier announcement by the NFL to expand exhibition play abroad in continental Europe.

Jim Small, senior vice president of MLB International, said other U.S. leagues see the NBA as the frontrunner in building audiences and developing talent outside of the domestic market, but comparing those efforts doesn’t compare. is not always clear.

“In soccer or basketball, the concept is quite simple: there is a rectangle, and you put the ball in the goal or in the hoop. Baseball is a little more nuanced,” he said, referring to its complex rules. In the UK market, the league has around 5 million baseball fans, 1.3 million of whom are considered “diehards”, according to Small.

For the NBA, its target growth market is Africa. It is “the youngest continent in the world, it has more than a billion inhabitants and its growth is rapid. . . that’s why we chose it as the only place outside of North America to launch a league,” Tatum said, referring to the Basketball Africa League which is currently in its second season.

Last year, the NBA and private equity group Helios Fairfax Partners created NBA Africa, an investment vehicle with an enterprise value of $1 billion aimed at developing more basketball content on and for the continent.