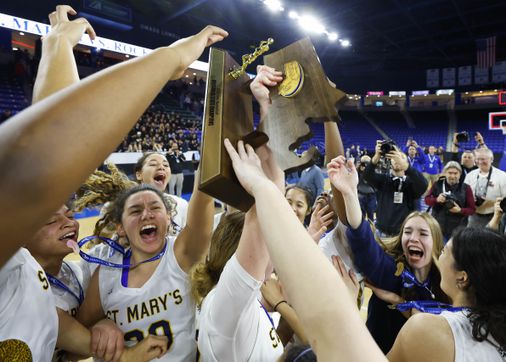 Championships have become the norm for St. Mary’s since Jeff Newhall took over as women’s basketball coach in 2005 and became athletic director in 2007.

Newhall (Class of ’94) steered his program to a Division 3 state title at the Tsongas Center on Friday night with a thrilling 46-44 victory over Rockland, then watched his former student David Brown (’89) coach the program basketball team to a 71-40 win over Watertown on the same court.

“All year [Brown and I] talked about how we both had tremendous talent, but for two teams to win on the same night in the ultra-competitive state of Massachusetts, that’s hard to do,” Newhall said. “I can’t put into words the accomplishment this is for the school.”

Newhall had St. Mary’s in position to win a D3 state title in 2020 when the tournament was halted due to the coronavirus pandemic. The boys’ basketball team fell to Burke in the D3 state semifinals at TD Garden that season, but bounced back two years later to clinch their first title as a Division 3 program.

With those titles, St. Mary’s has now won a championship in at least one sport in 14 consecutive years, with more than 20 total state titles during that time.

“St. Mary’s is a different animal,” Brown said. “We’re going into the season and the goal is a championship. They don’t want the North [sectional] championships or oriental mass. [finalist trophies] or whatever, you can keep them, we don’t have room for them.

“The sporting achievements are amazing here and so are the academics. It was great to watch the girls win. We’ll be celebrating this one as a community for sure.

Fouls the NBA does not enforce