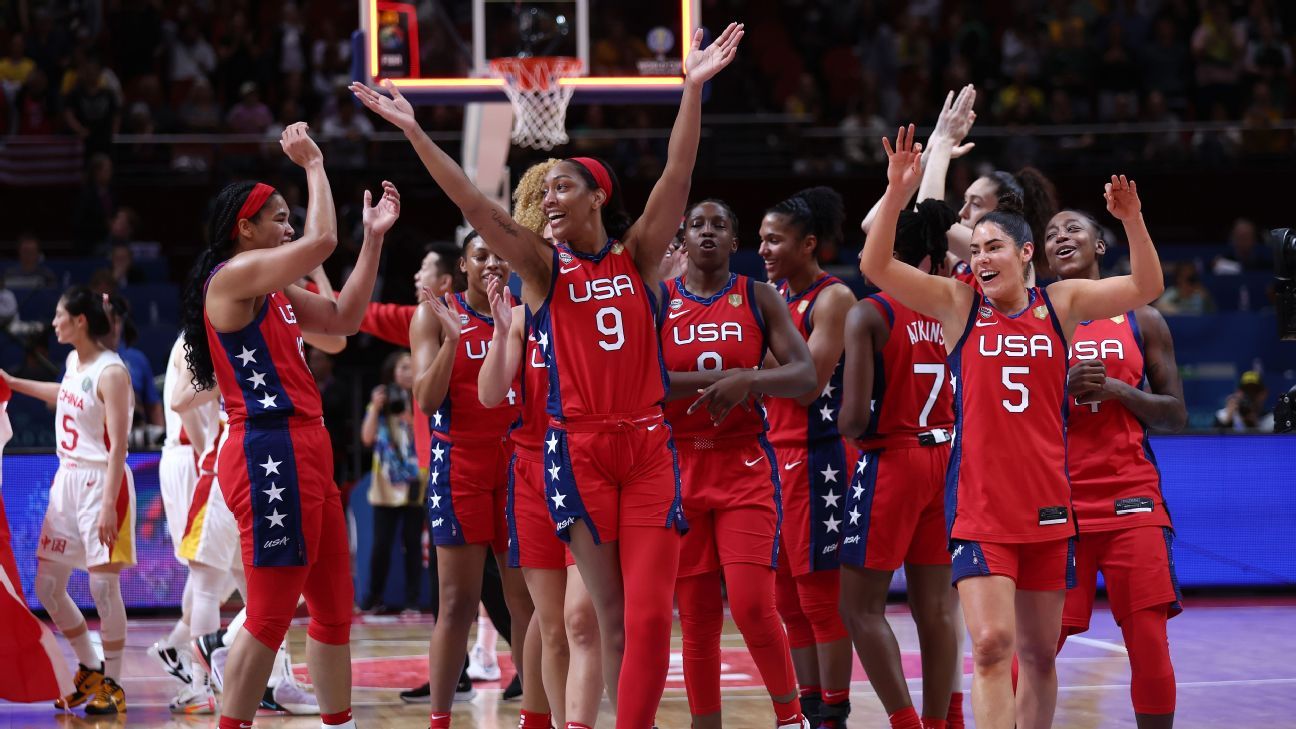 SYDNEY — Before the USA women’s basketball team began the FIBA ​​World Cup 2022 with a revised roster, some wondered if a team with just five players returning from the Tokyo Olympics last season could be vulnerable.

But just as generational talents like Sue Bird and Diana Taurasi took over when legends like Dawn Staley and Lisa Leslie stopped competing for USA Basketball, American Women in Australia ended those reservations when the tournament ended. . Team USA cruised through the World Cup to claim a fourth consecutive gold medal and 11th overall, with an average margin of victory of 40.8 and only one game decided by less than 15 points.

While last year’s Olympic team marked the final run for some of the sport’s legends, this new-look American team, on paper, can revive it with this same group at the Paris 2024 Games, where USA Basketball will be looking for an eighth consecutive victory. Olympic gold medal. Alyssa Thomas was the only 30-year-old on the US team at the time of the World Cup.

“I don’t think we’re showing any signs of stopping, that’s for sure,” said Breanna Stewart, who won her third World Cup gold medal last week. “Our age has definitely gone down [compared to Tokyo]. But we have a lot of people who are just new to the league, who are entering their prime, in their prime. It’s hard to stop.”

With the 2022 World Cup behind us, we take a look at the biggest questions facing Team USA and what lies ahead in Paris and beyond.

Who will be on the team? Which young players could earn spots in the roster?

Are Taurasi and Tina Charles 100% done with USA Basketball? What about Elena Delle Donne, a 2016 Olympian who has battled serious back issues for the past two years? Where do Tokyo Olympians Skylar Diggins-Smith and Napheesa Collier stand? The former left the Phoenix Mercury before the end of the WNBA season for personal reasons, while the latter is still returning from childbirth and maternity leave. Neither was in USA Basketball’s national team roster prior to the World Cup.

And whenever Brittney Griner is released from Russian custody, it’s unclear whether she wants to return to court.

Yes, there are a lot of questions about former national team members to be answered, but the emergence of promising players will also play into what the roster will look like in 2024. USA coach Cheryl Reeve said that Shakira Austin’s pro experience was partly what gave her an edge to make the World Cup roster over someone like Aliyah Boston, who was in the national team pool of the World Cup and trained with the Sydney squad ahead of the final roster cuts. By the time the Paris Games, Boston will have one season-plus of WNBA experience under its belt.

Rhyne Howard and NaLyssa Smith, WNBA rookies who were also in the final national team pool, could also compete for spots.

Who are the backcourt and frontcourt anchors?

Chelsea Gray, who turns 30 this month, has established herself in Sydney as Team USA’s next standout point guard, but USA Basketball undoubtedly has its eye on younger and potentially transcendent guards in the rising college juniors Caitlin Clark and Paige Bueckers, though Bueckers will miss the upcoming season with a torn ACL. But it’s possible that USA Basketball will end up going after those young players, opting to bring some on board in 2026.

As for the current US roster, some fans were surprised by Sabrina Ionescu’s reduced role in Sydney. She played a minimum of 12.8 minutes per game, which Reeve attributed to New York Liberty’s guard position on the depth chart. Could Ionescu have a Kelsey Plum trajectory, playing a low-key role in her first World Cup but taking on a bigger role in her second?

A’ja Wilson, 26, and Stewart, 28, are the two newest World Cup MVPs, arguably the best pair in the world and could be around for maybe another decade. But while the American women have plenty of length on the perimeter, the team is still a bit undersized on the inside, especially without Griner. Wilson and Austin are the only two players 6-foot-5 or taller. This was sometimes revealed by 6-9 Han Xu and 6-7 Yueru Li in the gold medal game.

This could impact which players USA will add to the frontcourt in the future. Or Team USA might tend to trust their somewhat smaller but versatile and strong post defenders. Which brings us to…

What is the team identity and where can USA improve?

Reeve seems attached to a defensive and fast system. She praised her group of players – including those who attended training camp but did not make the World Cup squad – for their confidence and buy-in to establishing the new identity of the American team, as well as for taking on roles outside of their normal positions. on court. That selflessness has been a great mainstay of USA Basketball over the years and is expected to continue, even with such a drastic changing of the guard.

With the athletic players she had in Sydney, Reeve’s group thrived in her system. American women achieved the same number of total turnovers as flights they won. Thomas was a great driver of that style, and although she was new to the senior national team in a major competition, it’s hard to imagine her not being with the team in Paris.

But at the post-championship press conference, Reeve discussed the need to improve further on the defensive end. The United States is aiming to keep their opponents within 40% shooting, but China shot 43% from the field in the gold medal game. In Reeve’s words, “we were a bit high risk, high reward”, although the team still managed to achieve their primary goal of being disruptive and providing great ball pressure on opponents.

USA shot 55% on 2-point field goals and 41% on 3-point field goals – a pretty healthy percentage that was reduced by Ionescu’s 30.8% clip. Still, Team USA’s offensive flow or execution – particularly in the half court – sometimes lagged behind what they were achieving defensively, something Reeve will look to improve on as his group progresses. central will spend more time together. But American women have still managed to shift into high gear to get ahead with big margins behind a resilience and ability to win in different ways that will serve them well in the long run. And USA’s 2.3 assists-to-rotation ratio was by far a tournament high, with China coming in second with 1.8.

Which countries are considered the biggest challengers to the United States?

The gap between American women and other national teams has been closing for a long time, as evidenced by Japan’s silver medal in Tokyo. No team at the World Cup has looked as threatening to the United States’ bid for the championship as China, which won a medal for the first time since 1994 in a major international competition and played its last two games without Li Meng.

Although the United States were younger than in previous years, they were one of Sydney’s three oldest teams by average age: Australia came in at 30.0, followed by Serbia at 27.9 and from the United States at 26.9. The Chinese roster has five players aged 25 or younger.

“They’re not going away,” Plum said. “Credit to China. They really pushed us. They pushed us physically with their big guys.”

The Age-Old Question: Talent vs. Chemistry?

The United States have managed to continue their streak of success while teams from other countries can train together more frequently. But as the WNBA schedule appears to be expanding — teams will play 40 regular season games next year — such a rapid turnaround between the WNBA season and major international competitions could hamper the ability of American players to merge.

After all, we were one decisive game away from Riquna Williams extending the WNBA Finals to Game 5, which would have made it very difficult for the Aces trio to make it to Sydney. While the United States comfortably won their first two games without Gray, Plum and Wilson, their value was indisputable once they took the floor.

The ‘talent versus chemistry’ issue is not new to the global women’s basketball scene, but as more countries invest in their domestic programs and the game expands internationally, it will be interesting to see what, if anything, USA Basketball is doing to make sure it’s building enough chemistry and not just relying on talent to keep winning.

Reeve didn’t venture to assess what the landscape might look like between now and the next Olympics when asked about it after the championship game. But she postulated: “I think every team will learn from this experience and gain a lot of knowledge at the World Cup to prepare, prepare. Teams will grow, teams that have those experiences.”

She was asked specifically about other teams, but much of her message applies to her own team as well. With a roster similar to Sydney’s, the new American outfit have the tools to build on their World Cup success and successfully defend their Olympic gold while continuing to enhance their decades-long legacy of victory, if not dominance. .